Chetolah, Kansas is an extinct town in Ellis County that got its start in 1886. 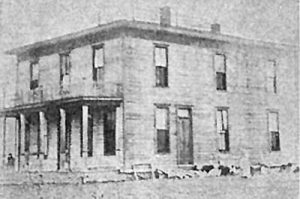 Anticipating the arrival of the Omaha, Dodge City & Southwestern Railroad being built through the area, Chetolah was founded in 1886 by a Topeka man named Thomas Fulgum, who made a number of investments in the area. It was called Chetolah, for a Native American name for the Smoky Hill River.

In 1887, a 12 room hotel was built, along with a store, a grain elevator, and a couple of dwellings. Fulgum, who was a horse racing fan, also built a horse track between two barns. The town was officially incorporated in 1888 by the Chetolah Land and Town Company. That year, a bridge was built over the Smoky Hill River and the Palatine post office, which had originally been located a few miles east was moved into the Chetolah Hotel.

However, the Omaha, Dodge City, & Southwestern Railroad folded due to a lack of investors and concerns over the river’s history of flash flooding. The Chetolah Land and Town Company also folded in 1889 and Fulgum left the area. 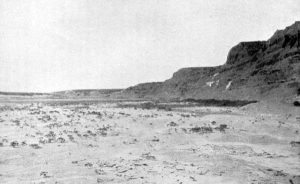 A.W. Copeland then obtained the hotel and lived there with his family. He also ran a general store that catered to nearby farmers and continued to serve as postmaster.

In 1893, Chetolah would come to life again when miner H.P. Artz claimed to have discovered gold near Chetolah in the bluffs nearby. Within no time, rumors of gold being found in the shale of the Smoky Hill River began to circulate. Two more towns would also be established in the immediate area — Gold Mill in 1894 and Smoky Hill City in 1899. The hotel was reopened and a bridge was built from the mining site at Smoky Hill City to Chetolah. Soon, miners were crawling along the river beds in search of the precious metal, and two gold mills — the Close and Holliday, would operate in the area for three years, but showed very little profit. Most of the “gold” turned out to be iron pyrite. Though real gold and zinc were found in very small amounts, the cost was too high to make a profit. 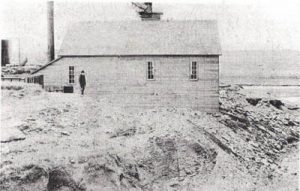 The post office closed in September 1897. For a few more years, miners continued to look for the Mother Lode up and down the river but would be disappointed. The Ellis County gold boom sputtered along until 1903, by which time most everyone realized that it was a fruitless effort. The mining shafts of the Chetolah townsite were soon abandoned. The lumber from the gold mill was hauled six miles to Antonino to help build the church in 1905. In addition to the death of Chetolah, Smoky Hill, and Gold Mill were also abandoned. Copeland sold the hotel to Peter Hauschild in 1907, who converted it into a home. In 1940, the building was torn down.

Though Chetolah’s life had ended, the location would once again spring to life in the 1920s. In 1914, Mike Unrein purchased property from his father on the north side of the river in 1914 and planted oak, cottonwood, pine, and many other trees forming shady glens around naturally occurring pools. He was then called to serve in World War I but when he returned, he married and in 1926 they began to make more improvements including damning the spring creating a lake which boats could navigate. They also built a 36,000 square foot pool spring-fed swimming pool with a 36 foot tall diving tower and a 34 foot tall slide into the water. The site also featured a 6,000-square foot dance pavilion, a race track, bath houses, concessions, and a fish pond. 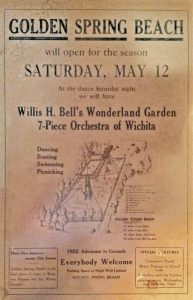 In 1928, they opened Golden Spring Beach to the public. During its period of operation, large crowds were often hosted for events such as concerts, motor races, and ball games. In July 1928, nearly 3,000 people attended a celebration that featured motor races, airplane flights, and a ball game between LaCrosse and Munjor. On another occasion, 5,000 people gathered to see a fire diver saturate himself with gasoline and dive off an 85-foot tower into the lake covered with ignited gasoline. Lawrence Welk and other famous bands often played for dances there. The facility also hosted rodeos on the grounds.

The beach closed in 1933 due to the Great Depression, but the springs still supply enough water to fill the pond today, and the diving tower foundation is still there.

The only remnant today of the old town is Chetolah Gold Road. 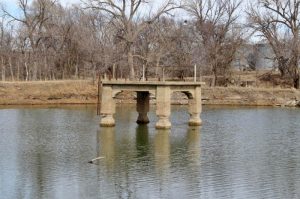