Ellis, Kansas, a small town in west-central Ellis County, got its start as a water station along the tracks of the Kansas Pacific Railroad in 1867. 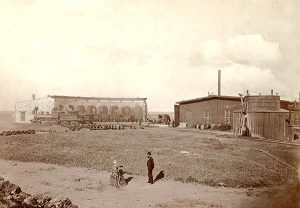 Later the railroad purchased the site for $1200 through the Homestead Act. On June 27, 1870, the fledgling town gained a post office. The Kansas Pacific Railway Company laid out the townsite in 1873

In its early days, Ellis was a typical railroad town with most men employed by the Kansas Pacific Railway. As it was surrounded by a rough, broken country unsuited for agricultural pursuits, its trade was very limited. The railroad built substantial stone structures, including a two-story stone building that served as a depot and hotel, a roundhouse that could serve up to 14 locomotives, and several outbuildings.

The first person to start merchandising in Ellis was a man named Thomas Daily, who erected a one-story double storeroom. One room was devoted to the sale of clothing exclusively, and the other to general merchandising. Daily was born in Ireland and came to America with his family when he was still a boy. After serving in the Union Army during the Civil War, he made his way to Ellsworth, Kansas, in 1868, where he engaged in merchandising for a short time and was also in the employ of the United States Government. A few years later, he made his way to Ellis in 1870, where he erected the first store in town, which he enlarged a few later. 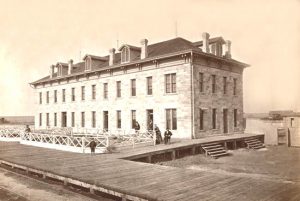 The first school was established in 1873 and the first church organization the following year. The railway ran through the center of the town, and in the beginning, all the business houses were rather inferior buildings — all one story, some stone, and some frame.

In 1875, Ellis became a shipping point for cattle herds, driven up from the south and continued to be so for nearly five years. The busiest years were 1877 and 1878, at which time, like many other Kansas cowtowns, it had the reputation of being a “tough place.” Law-abiding people were glad when the trade moved elsewhere.

Another general merchandise store was built in 1877 by R.S. Ormerod, who had arrived in the Ellis in January 1873. Being a machinist by trade, he worked in that capacity for the Kansas Pacific Railroad five years, then went into merchandising. Born in England in 1853, he came to America with his parents in 1863 and settled in Peoria, Illinois, where they lived until coming to Kansas. The store, known as Kelley & Ormerod, a two-story stone structure, opened in 1878. The Nichols Brothers, Eli Sheldon, Reading & Bowen, and G. F. Lee were other early merchants.

By the early 1880s, the railroad building continued to dominate the town, with only one other two-story stone business building being the Kelly & Ormrod General Merchandise Store. The majority of the town’s residences were plain, unpretentious, but neat and comfortable looking buildings, indicative of the homes of thrifty, industrious mechanics.

In 1882, a very fine improvement was made to the town by constructing a two-story stone school building in the southern portion of the town. It was a very neat, well-finished structure, surmounted by a belfry that is quite ornamental in design. By that time, there had been, for some years, several church organizations in town, but there had never been a church building erected. After the new schoolhouse was completed, the members of the Congregational Church Society purchased the old frame school building, which they then converted to a church. John Henry, a Union Pacific Railroad dispatcher in Ellis, invented the electric streetcar in 1882. 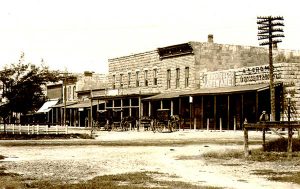 On January 10, 1888, the City of Ellis was incorporated as a Third Class City. At about this same time, two characters well known in the Old West were often seen in town — Wyatt Earp and Buffalo Bill Cody.

Over the following decades, Ellis continued to slowly grow until its population peaked at 2,649 in 1950. 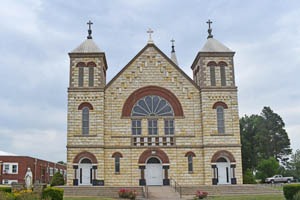 Today, Ellis is a City of the Second Class with about 1,950 people. The town is the site of Walter P. Chrysler Boyhood Home and Museum. Chrysler, the founder of the Chrysler Corporation, grew up in Ellis. When he was 17, he began his career working in the railroad roundhouse, where he became a machinist’s apprentice and developed his expertise in metalworking and machinery.

The Ellis Railroad Museum features items and photographs from Ellis’ railroading past. A 5,000-square-foot model train exhibit is also on display. A miniature railroad runs on a one-mile loop track outside the museum.

Ellis is located on the north bank of Big Creek, just one mile east of the west line of the county, about 13 miles northwest of Hays. 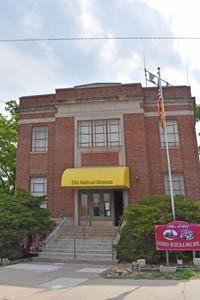