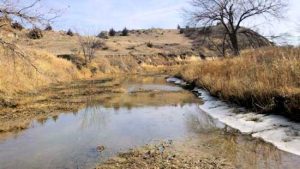 The Saline River, the principal tributary of the Smoky Hill River, is 397 miles long and lies completely within northwest Kansas. The river takes its name from the French translation of its Native American name Ne Miskua, referring to its salty content.

Originating in the High Plains of northwestern Kansas there are two forks — the south fork beginning near the Sherman County-Thomas County line and the north fork rising in central Thomas County. The two forks meet in Sheridan County about five miles northwest of Grinnell forming a sluggish and navigable riverbed of sand and mud. 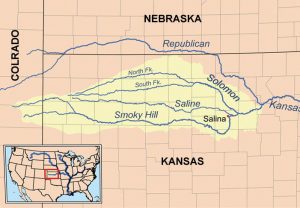 From here, the river flow east through the Smoky Hills region of north-central Kansas and joins the Smoky Hill River approximately one mile south of New Cambria, Kansas in Saline County.

The first recorded reference to the river was in October 1724, when French explorer Etienne Venyard de Bourgmont was on his way to negotiate a peace treaty with the Padouca whose “Grand Village” was then located on the Saline’s banks. At that time, he reported finding a “small river where the water was briny.”

Eight decades later, in 1806, an American expedition led by Zebulon Pike crossed the river on its way to visit the Pawnee tribe. By 1817, the river was known as the “Grand Saline.” 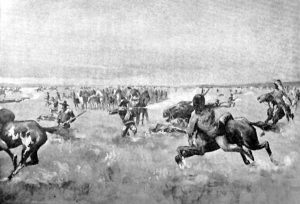 Battle at the Saline River, Kansas.

The Pawnee and the Kanza tribes, who had long used the area as hunting and trapping ground, claimed land along the Saline River until the 1850s when American settlers began to arrive.

In August 1867, Cheyenne warriors massacred a party of railroad workers in Ellis County, an incident which led to a battle between the Cheyenne and Buffalo Soldiers from Fort Hays that became known as the “Battle of the Saline River.”

The Saline River flooded periodically during the late 19th century and the early 20th century. In 1964, the U.S. Army Corps of Engineers dammed the river in eastern Russell County for flood control, creating Wilson Lake.