Another of the many villages in German-Russian immigrants settled, the people first arrived in Herzog (Victoria) in August 1876. The immigrants then established a small village along Big Creek before moving a couple of months later to the present location. They also soon organized the Munjor Land Company, a townsite was surveyed, and each lot holder became a member of the company.

More immigrants joined them over the next couple of years. The residents built the St. Francis Catholic Church — a small frame building in 1877, to which they added on to several years later. Then, in September 1881, the tiny community received a post office.

In 1882, the Munjor Land Company was replaced with the Munjor Town and Grazing Company, which required that no portion of the landholdings could be burdened with debt, transferred, or sold without the consent of two-thirds of the shareholders. The organization was unsuccessful; however, as disputes erupted, that split the village into two factions. After a futile attempt to settle matters in the courts, the company was dissolved.

In 1889, the frame church was replaced by a more substantial stone building dedicated the following year. Over the years, it was enlarged. A parochial school building was also built in the late 1800s that was later used by the Hays public school system. By 1910, Munjor’s population was about 100, but it fell over the next decade as the post office was closed in May 1919.

Unfortunately, the church was destroyed by a fire in February 1932. However, reconstruction soon began, and it was restored, but the steeple was never replaced.

The village saw a growth spurt in the 1930s as it once again obtained a post office in May 1936. Its life, however, was short. Five years later, in September 1941, it closed its doors forever. 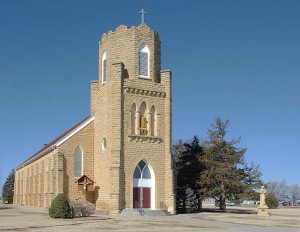 The St. Francis Catholic Church continues to serve parishioners today, and the old parochial school building is now utilized as a parish hall. The village continues to have a population of about 220 people. It is located about seven miles southeast of Hays, Kansas.