Yocemento, Kansas and the Hog Back courtesy Wikipedia.

Yocemento, Kansas, is an extinct town in central Ellis County.

The location was first called Hog Back when a railroad station was established in 1881. Hog Back was the local name for the high limestone and chalk ridge that runs from just west of old Fort Hays to Ellis.

The town of Yocemento was founded in 1906 by business partners Erasmus Haworth I. M. Yost, who wanted to start a cement plant. At that time, several communities used the area limestone to manufacture cement.

Forming the U.S. Portland Cement Company, the business partners platted the townsite in 1907, and its post office opened on March 26th of the same year. Fifteen months later, in mid-1908, the plant was operational, with most of its common laborers being Hungarians. These men and their families were mostly Catholic and first held services in their homes. However, in 1906 they built a frame church on a site west of the first bend of Big Creek.

In 1910, the small community had a general store, a hotel, a restaurant, and a post office. On the Union Pacific Railroad, shipping, especially for the cement company, was also conducted. It had a population of about 75 people at the time. 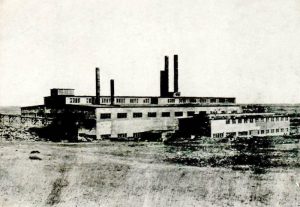 Unfortunately, by 1917, the cement plant was losing money and went into bankruptcy. The equipment and mill were sold to a Denver, Colorado competitor. Almost all of the Hungarian population moved from the area without work, though some Germans and Russians remained. Its post office closed on February 15, 1917. Without a congregation, the church was abandoned and later moved to Buckey Township in 1931, where it was used as a community hall.

The old town is located about six miles northwest of Hays, Kansas, on U.S. Highway 40.