Walker, Kansas, got its start in 1872 by settlers from Ohio. Situated on the Union Pacific Railroad near Walkers Creek. English and German-Russian immigrants primarily settled the area. A post office opened in August 1873 but closed just a few years later in September 1876. Then several Volga-Germans from Russia and more Germans from Kentucky and Ohio, known as the “Plattdeutschen,” came to the area in 1876-1878. With this new influx of people, the post office reopened in 1878. 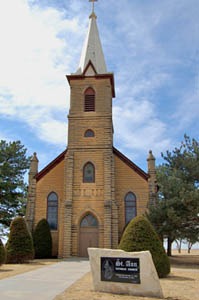 The first school building was constructed in 1893, which would also later serve as a church. The first Catholic Mass was read in this building on Christmas, 1903, and soon residents began to build the St. Ann’s Catholic Church in the spring of 1904.

By 1910, the small town boasted a grain elevator, several retail stores, and a population of about 65. The building of a parochial school began in the fall of 1924 and was dedicated the following August, with the Sisters of St. Agnes in charge of the school. The building today continues to stand, now utilized as a community center.

The town thrived until the Great Depression when many businesses closed. Those who remained were primarily involved in agriculture until 1942 when the Walker Army Airfield was built just 2.5 miles northwest of the town during World War II. Also known as the Victoria-Pratt Airfield or Walker-Hays Airfield, the United States Army Air Corps constructed it. Construction of the airfield included three concrete runways, the cantonment, initially designed for about 1,000 men but later expanded; a dispensary, a mess hall, and a hangar. Later, four more hangers were also built.

The base began operations as a satellite field of Smoky Hill Army Air Field located in Salina. In February 1943, the Second Air Force organized the 6th Heavy Bombardment Processing Headquarters there and, a few months later, began training B-29 crews for combat duty. The base continued to expand in both mission and size, and by August 1944, nearly 6,000 personnel were stationed at the field. New structures included storage tanks, warehouses, laboratories, a machine shop, a hospital, a garage, a paint shop, and various other structures.

With the victory over Japan in August 1945, the mission changed and diminished, with only the Salina base continuing combat crew training. Consequently, Walker was reassigned to the Air Technical Service Command in September 1945, and on January 31, 1946, the base was made inactive. The War Department placed the installation in a surplus category in 1946, and in December, it was transferred to the District Engineers. Later, portions were leased and finally sold to a private citizen in 1959. Today, its buildings are mostly in ruins, but its runways are still used for agricultural purposes. 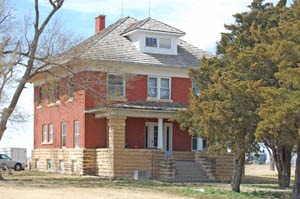