Fort Hays State University (FHSU) is the fourth largest of the six state universities in Kansas. It is located in Hays, Kansas. 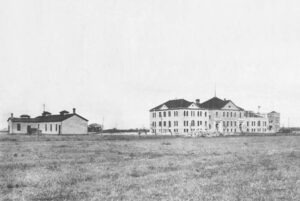 After Fort Hays closed in 1889, the legislature asked that the Fort Hays reservation be donated to the state as a location for a branch of the state agricultural college, a branch of the state normal school, and a public park in 1895. However, no action was taken on the request, and in 1899, the Interior Department declared the land opened for settlement. However, in March 1900, the Kansas delegation in Congress managed to secure the land and buildings for educational purposes. In 1901 the legislature passed legislation establishing the Fort Hays Experiment Station (part of Kansas State University) and set apart about 4,000 acres for the Western Branch State Normal School.

The Western State Normal School began with a summer session in June 1902, and the first regular term opened in September, with an enrollment of 23 students.

The school was conducted in the old fort buildings until 1904 when the central portion of what was the main building was ready for occupancy. At that time, another large building closer to the city was also completed, and the college officially moved to its present location.

By 1910, the total enrollment had increased to almost 1,000 students. In 1914, the Western Branch of the State Normal School separated from the school in Emporia and became Fort Hays Kansas State Normal School. At the same time, the tiger mascot was adopted, but it is unknown how it was chosen. The school became the Kansas State Teachers College of Hays in 1923, and its name was changed to Fort Hays State College in 1931. It was elevated to university status in 1977. 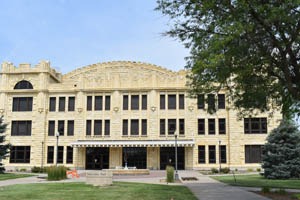 Today, the campus sits on 200 acres and includes more than 40 limestone-faced buildings. It is located just to the west of the Hays business district, two miles south of Interstate 70. Today, nearly 10,000 students partake in more than 60 academic majors for undergraduates and 19 for graduate students. The school also offers many online degrees through its “Virtual College,” which provides for a large variety of online courses and degrees to students who cannot be on campus. It is only one of two universities in the state that offer agriculture as a major. Its Athletics programs include football, volleyball, cross country, basketball, wrestling, baseball, softball, track and field, tennis, golf, rodeo, and shotgun shooting sports.

At the Forsyth Library, visitors will find not only materials that support the general needs of faculty, staff, and students but also an extensive collection of fiction and nonfiction material about the American West on such topics as the railroads, the cattle industry, cowboys, Native Americans, and frontier life. The William D. Paschal World War II History Collection contains books, declassified government documents, maps, photographs, and other materials. The library is also the repository for the books, papers, and periodicals of the Fort Hays Genealogy Society. 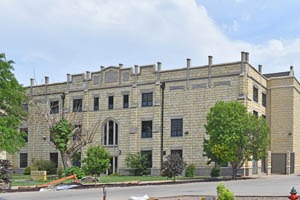 Also located on campus is the Plymouth Stone Schoolhouse on the banks of Big Creek. This authentic, one-room schoolhouse, built of limestone in 1874, has been restored and furnished with school antiques and textbooks. Visits are arranged by appointment only by calling 785-628-4538.