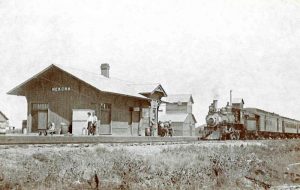 Before Nekoma became an “official” town, it was first settled by John W. Felch, who homesteaded on Walnut Creek in 1871. Other settlers soon followed and the town was platted by the Santa Fe Railroad Town Site Company in 1884 for use as a depot and stockyards. However, it would be several more years before the railroad would reach Nekoma on September 1, 1887.

In the meantime, a new depot was constructed and was ready for its arrival. A post office was established on June 23, 1890. In 1893, a man named Elmer Miller built the first general store, and in 1900 a larger general store, that included a large soda fountain and creamery, was built by Mike Moran. At the turn of the century, the village boasted just about 25 people but would grow over the next several years.

Soon, it boasted three grain elevators, a hardware store, lumber yard, implement dealer, barbershop, and restaurant, in addition to its two general merchandise stores. By 1910, the community had grown to 75 people and before long more businesses were built including a service station, feed mill, and the Nekoma State Bank in 1916. The community also had a school, an opera house, two churches, and a local chapter of the Independent Order of Oddfellows.

The community’s population peaked at just over 100 residents, but the town was never incorporated.

A two-room schoolhouse continued to be used until the mid-1950s and the Nekoma State Bank survived the Great Depression and decline of population, operating out of a simple wood frame building until 1986. At that time, the assets of the 70-year-old bank were purchased by investors who moved its operations to La Crosse, reopening in March 1987. 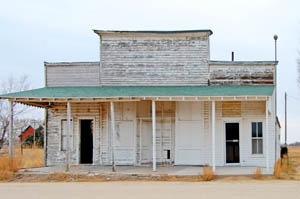 The former Miller General Store in Nekoma, Kansas. The right side of the building was used as a post office. Photo by Kathy Weiser-Alexander.

The former wood frame Nekoma State Bank then stood abandoned for the next 15 years. However, with the help of the Rush County Historical Society, the building was moved to La Crosse in 2003, restored, and is now a part of the La Crosse Museum Complex, developed into a museum of rural banking.

The Nekoma post office was closed in 2008 and the old settlement is now a ghost town, with only a few of its original buildings and even fewer people remaining.

Nekoma is located about seven miles west of Rush Center on Kansas Highway 96.

©Kathy Weiser/Legends of Kansas, updated May 2021. 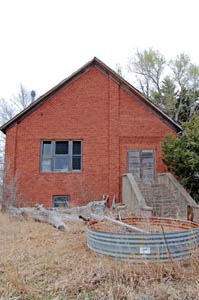