Nestled on the south bank of Walnut Creek, Timken, Kansas, got its start when the Atchison, Topeka & Santa Fe Railroad was under construction west from Great Bend in 1886. The land was owned by Henry H. Timken, an inventor who had made a fortune and speculated in lands among future railroad sites, including 4,800 acres near what would become the new settlement. 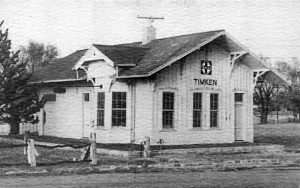 When Timken sold the land to the Railroad Town Site Company, one condition was that the town was named for him. The site company agreed and soon laid out lots along the proposed railroad. In 1887 the depot was built, but no other lots were sold. However, there was evidently enough population in the surrounding area to support a post office that opened on July 23, 1888.

However, that changed a decade later, when a merchant purchased most of the town sites and opened a general store to serve the many immigrant settlers from Czechoslovakia, Bohemia, and Moravia, who had come to the United States. He immediately established a real estate office to sell parcels of land. He worked with the railroad to make an appealing program that offered discounted fares for prospective settlers to travel west to inspect the land. If they purchased a parcel of land, the ticket price was applied toward the sale price of the land. 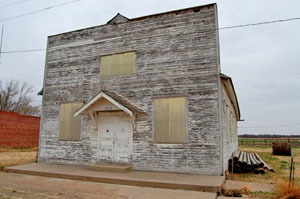 An old commercial building in Timkin, Kansas by Kathy Alexander.

Though the idea worked to a certain extent, it was probably not nearly as successful as the merchant had hoped. However, in 1904 a community hall and a Catholic Church were built and the following year a lumber company was established.

By 1910, the community still only had a population of about 50 but had gained a mill, a grain elevator, and several retail establishments. A bank was organized in 1913, and the town slowly grew to the point that it was incorporated as a city in June 1930. 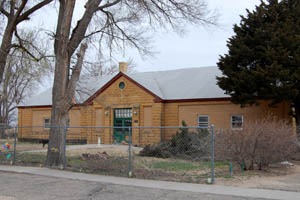 Today, Timken is called home to only about 38 people. A beautiful National Bohemian Cemetery is located south of the community.