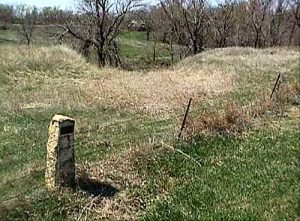 Hampton, Kansas is an extinct town in Rush County.

At the crossing, a man named Monty Leach operated a small store and became the town’s first postmaster on February 2, 1877. The small community began to grow and a man named Richard Mulroy built a two-story house and later a hotel. More businesses were soon established including the Noble Brothers Store and a blacksmith shop operated by a man named Billy Metz.

As more and more settlers came to the area, a stage company was founded by John Buffer, who operated for only a two-month period in 1877. However, after Buffer’s failure, two men by the names of Bob Brooks and Captain G. W. Edwards opened another stage line, headquartered in Hampton. The business carried mail deliveries and passengers between Forts Hays and Dodge City on a three-day journey. Operating two three-seated coaches, which would accommodate six passengers, each paid a six-dollar fare for a one-way ride.

Following the Dull Knife Raid in the fall of 1878, in which Cheyenne Indians left their reservation in Oklahoma and raided western Kansas, the stage service was disrupted for a week. However, it soon resumed under the escort of soldiers for a two-week period. It is unknown how long the stage operated. Bob Brooks soon opened a general store. At some point, the community had a school. But, for Hampton, life would be short. When nearby McCracken was organized with the coming of the railroad in 1886, Hampton began to die. Bob Brooks continued to run his store for 3-4 years following McCracken’s founding, but it finally closed.

Though the community is long gone today, area residents have worked to restore the Hampton Cemetery which is located about five miles east of McCracken. The townsite of Hampton was located immediately south of the cemetery. Across the road from the townsite, the foundation of the old schoolhouse can still be seen. To the north of the foundation, several ruts of the old trail can also be spied.