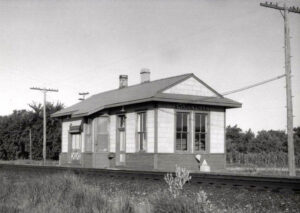 Aliceville, Kansas, located in Avon Township of Coffey County, is an extinct town because it no longer has a post office. However, it is also an interesting ghost town with a number of buildings, a profitable bank, and an active church.

Aliceville was a station on the Missouri Pacific Railroad and probably got its start when the railroad came through the area. A post office was established on July 20, 1883. The town soon became a shipping point of some importance.

On December 3, 1908, the Farmers State Bank of Aliceville opened its doors for business to serve Aliceville and the surrounding communities. The bank remains open today in a modern building.

In 1910, Aliceville had a bank, a money order post office, an express office, a good retail trade, and a population of 150. 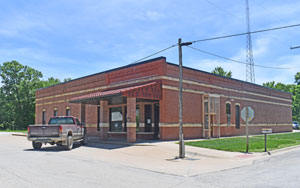 In June 1933, the small town was up in arms after the Farmers State Bank of Aliceville was robbed by two men named Gene Johnson and LeRoy Wright, who made off with an unknown amount. No doubt, this was the talk of the county in the following weeks. In August, the Emporia Gazette reported that Gene Johnson was fatally wounded by a posse near Springton, Arkansas, but LeRoy Wright escaped.

In the following decades, Aliceville’s population declined. Its post office closed on July 1, 1994.

Though Aliceville still maintains several buildings and a small population, it is a ghost town today. In addition, the Farmers State Bank, which opened its doors in 1908, is still in operation. The bank is the only one in Coffey County that didn’t close or merge with another bank during the Great Depression. Interestingly, bank employees still used the original outhouse, which still stands on the property, until 1998. The family-owned bank also has branches in Burlington and Lebo.

The St John’s Lutheran Church is still active in Aliceville, and a railroad still operates tracks nearby. 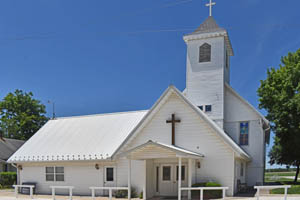 Aliceville is about 12 miles southeast of Burlington.