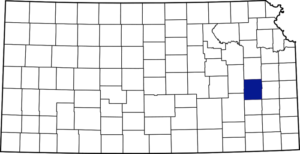 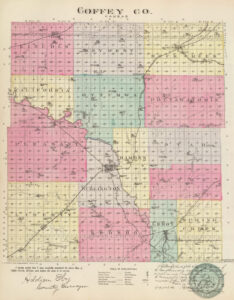 Coffey County in east central Kansas was organized as one of the original 33 counties created by the Territorial Legislature. The county seat and most populous city is Burlington. As of the 2020 census, the county population was 8,360.

The legislature established the county’s boundaries on July 22, 1855, and the county was organized on February 17, 1857. The county was named for Colonel A. M. Coffey, a resident of Miami County and member of the Territorial Legislature.

Coffey County is in the third tier of counties from the Missouri line and the fourth tier from Oklahoma. It is bounded on the north by Osage County, on the east by Franklin and Anderson, on the south by Woodson, and on the west by Greenwood and Lyon Counties. Its area is 654 square miles. 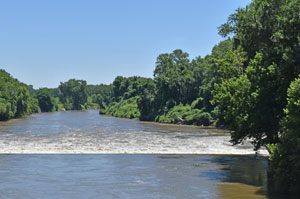 The first known settlement of white men within the county was made in the Neosho Valley in 1854 by Frederick Troxel, who built a log cabin on the old Indian trail about three-fourths of a mile south of the present town of LeRoy and moved there with his family. Mrs. Troxel’s brother, General John B. Scott, the founder of LeRoy, was an Indian trader at the Sac and Fox agency. The Indian trail extended from the agency southwest through Coffey County, crossing the Neosho River where Burlington now stands, where the Indians had a burial ground, and continuing to the buffalo hunting grounds in the Indian Territory.

A small colony from New York, including Ahijah Jones and his son, George, William R., and Alban Saunders, settled at the present location of LeRoy in December 1854. They brought their families the following year. Washington Vickery and Levi Heddens, who is said to have been the first man to cross the Neosho River in a wagon, were here in 1854 but did not locate until 1855. Others who came in 1855 were Dr. Hamilton Smith, a free-state man prominent in territorial struggles, Morgan Dix, Simpson Despain, Hiram Hoover, Judge Strawn, and Joe Lebo, all of whom settled near the present site of Ottumwa, and Mr. Crall on Lebo Creek, and the “Hampden Colony” consisting of 100 men and women from Hampden, Massachusetts.

This colony founded a town across the river from the present city of Burlington. Its promoters expected to make it the leading commercial center of southeastern Kansas. They put up business establishments and organized a county court. However, the founding of Burlington was a severe check to it, and with the permanent location of the county seat at the latter place in 1865, Hampden faded from view entirely. LeRoy and Ottumwa were located in 1855, and the county was pretty well settled by the end of 1856. 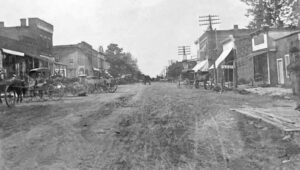 The first post office was established at LeRoy in March 1856, the mail being carried from the Sac and Fox agency by private conveyance until post offices were established at Burlington and Ottumwa when a mail route was put in operation.

Although the county was not yet organized, a court was established at Hampden under Judge Cato, which the following year was moved to LeRoy. When the legislature officially organized the county in 1857, LeRoy was made the temporary county seat. The following officers were appointed: F. C. Amsden, sheriff; John Woolman, probate judge; Richard Burr and Samuel Lock, commissioners. An election for commissioners was held in September and resulted in the choice of John Evans, John Wooster, and Enos Strawn. The Burlington Town Company made efforts to secure the county seat, but Wooster and Evans being favorable to LeRoy, it was located at that place. The legislature of 1858 changed the seat of justice to Burlington and provided for an election on the matter in October 1858. In the meantime, the board of supervisors met at Hampden, where the county clerk, Silas Fearl, lived, the other officers retaining their offices at LeRoy. The first meeting of the supervisors to be held at Burlington was on October 5, the next day after the election. Although LeRoy received the most significant number of votes for the county seat, it was never officially recognized. The county officers were retained there until Judge Rush Elmore came to Burlington to hold a court session for Coffey County. He ordered the county recorder to move his office to Burlington, and the court was held there. 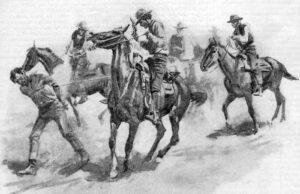 As a pioneer country and a border district, many tragedies and disasters of various kinds happened. There was only one hanging, and that was semi-legal, being ordered by an improvised court of citizens. Just south of the old Indian cemetery at Burlington lived a family named Claywell. Different members had been repeatedly arrested, but there being no jails, they always managed to escape. Horse stealing was the particular offense of the two grown sons, and the citizens decided that the next time they committed a crime, they would take things into their own hands. A short time after this conclusion had been reached, one of the young men stole a horse from LeRoy and was arrested. Word was sent out, and the citizens formed a court with a judge, jury, attorney for the defendant, and attorney for the state. He was found guilty and, on a vote of the mass who attended the trial, was hanged at LeRoy in presence of a vast throng of witnesses. This happened in 1858. Numerous murders were committed in the first ten years of the county’s existence.

The first school was Burlington District No. 1, organized in 1858. The first church was the Burlington Methodist, founded in 1860.

In 1861 another election was held to decide the county seat question. LeRoy received the largest number of votes but not a majority, and the county seat was still maintained at Burlington. Considerable trouble was experienced in getting the county officials to move from LeRoy, and in some instances, legal proceedings were instituted to compel removal. In May 1863, another county seat election was called in which Hampden received most of all votes cast and was declared the county seat. Another election for the same purpose was held in November 1865. After two ballots, Burlington was finally successful and was declared the permanent judicial seat by the commissioners at their meeting in January 1866. However, the people were not yet satisfied, and a final election was held in October of that year, which resulted in a majority for Burlington. 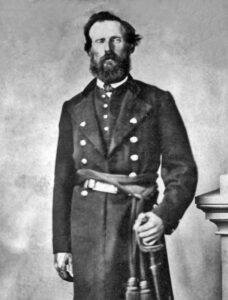 When the Civil War broke out, nearly all the able-bodied men in the county enlisted; leaving only about 100 to protect the homes and to act as a reserve in case of border troubles. Company G, Fifth Kansas cavalry, was mainly made up at Ottumwa and LeRoy, and Company E of the same regiment was made up at Burlington and vicinity. In 1861 General James Lane sent out horsemen over the territory of eastern Kansas for help to repel Confederate General Sterling Price’s invasion in Bourbon County, which was threatening some of the valuable Federal supplies. The word reached Ottumwa on Saturday afternoon, and the following day, 104 men left that point to reinforce Lane’s command at Fort Lincoln. They defended the fort and labored on the earthworks while General Lane was at the front.

In May 1862, the First and Second Indian regiments were organized at LeRoy from refugee Indians. Colonel Coffin, who was then superintendent of Indian affairs for that section of the country, including the Indian territory, had his headquarters removed from Tahlequah, Oklahoma, to LeRoy because of the turbulent conditions in the Indian Territory. Here he received the Indians who were driven from their homes, numbering some 8,000 people belonging to the Cherokee, Choctaw, Creek, Seminole, Chickasaw, Uchee, Quapaw, Keechi, Southern Shawnee, and Southern Delaware tribes. It was from these that the Indian regiments were organized and officered by white men. From lack of military discipline, over one-half of the first Indian regiment deserted and came back to LeRoy but were induced by Lieutenant Proudy to reënter the service.

The first county fair was held in 1868 and is the state’s oldest continuous county fair. 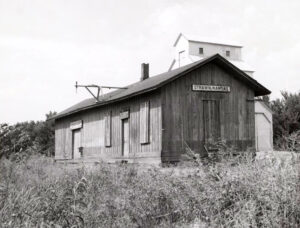 In the early 20th century, Coffey County was primarily an agricultural county. The general surface was rolling prairie, and the bottom lands, averaging one to two miles in width, comprised one-eighth of the total area. The native trees were oak, hickory, hackberry, elm, black walnut, sycamore, soft maple, box elder, ash, locust, and pecan. Sandstone, red ocher, and clay for brick and tile were found in commercial quantities. Salt springs and marshes were plentiful along the Neosho River. The county was underlaid with natural gas.

The Neosho River, the principal stream, enters the county on the west several miles below the northwest corner, crosses in a southeasterly direction, leaving near the southeast corner. Its tributaries from the north are Lebo, Hickory, Wolf, Long, Crooked, and Spring Creeks, and from the south, Duck, Turkey, Big, Rock, Otter, and Eagle Creeks.

The history of the railroads of Coffey County begins with the construction of the Neosho division of the Missouri, Kansas & Texas Railway in 1870, though several roads were projected before the war. In 1910, this road entered the county on the west and ran in a southeasterly direction into Woodson County, passing through Burlington and LeRoy junction. The Missouri Pacific Railroad, which ran through the southern part of the county from east to west, was built in 1880. The Atchison, Topeka & Santa Fe Railroad was built in 1878. It extended from the northeast corner of the county southwest to Gridley. Another branch of this road crossed the county in the northwest corner. 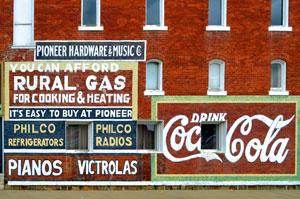