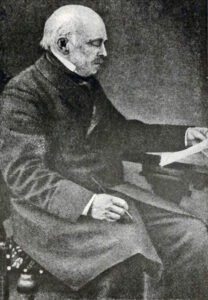 Amos Adams Lawrence was a businessman, philanthropist, and social activist. He was a key figure in the abolitionist movement and was instrumental in establishing the University of Kansas. Lawrence, Kansas was named for him.

Amos was born in Boston, Massachusetts, on July 31, 1814. His college preparation was made under the instruction of Reverend Jonathan F. Stearns. He graduated from Harvard with a Bachelor’s Degree in 1835 and a Master’s degree in 1838, after which he entered the mercantile business. He was interested in the manufacture of cotton, which had been his father’s business, and was president and director of several banks and industrial corporations in Massachusetts.

Lawrence married Sarah Elizabeth Appleton in 1842. He became associated with Eli Thayer and others in the colonization of Kansas and was treasurer of the Emigrant Aid Company. He was twice nominated for governor of Massachusetts by the Whigs and Unionists. At the outbreak of the Civil War, he assisted in recruiting the Second Massachusetts Volunteer Cavalry Regiment. He built Lawrence Hall for the Episcopal Theological Seminary in Cambridge for $75,000. He was treasurer of Harvard College 1857-63 and an overseer 1879-85. 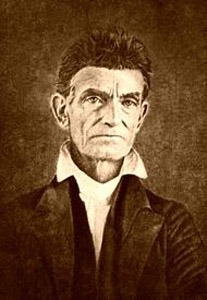 In 1846 he gave $10,000 to establish a literary institution in Appleton, Wisconsin called the Lawrence Institute (now Lawrence University) of Wisconsin. He also gave nearly $12,000 toward founding a Free-State college in Kansas, which sum, after a series of changes, went to the University of Kansas.

During the era of Bleeding Kansas, he donated guns, which were shipped to Jayhawkers and abolitionists in Kansas. He also wrote frequently to President Franklin Pierce, the husband of Lawrence’s cousin Jane, on behalf of the Free-State settlers.

Though he deplored abolitionist John Brown’s fanaticism and urged against violent resistance to the federal government, he provided funds for his activism and legal defense. When Brown was arrested at Harper’s Ferry, Lawrence appealed to the Governor of Virginia to secure a lawful trial.

He died at his summer resort in Nahant, Massachusetts, on August 22, 1886.