Arcadia, Kansas, is located in the northeast part of Crawford County near the Missouri state line.

A man named Howell was the first to settle here near Coxe’s Creek and opened a blacksmith shop in 1844. He had married a Cherokee Indian woman, which gave him the right to live in the Indian lands. He also built a double log house. 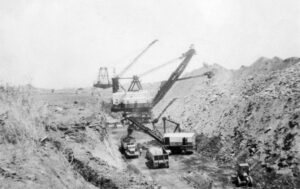 In 1856, Phil Hathaway, a former Massachusetts resident, had bought a squatter’s claim near Lawrence, Kansas, but when he returned with his family, he found another had possessed his claim. In May 1857,  Hathaway, with his old friend Judge John Wakefield, took a tour of southeast Kansas and the “Neutral Lands.” On their way back north, they stopped at a Howell’s place on the military road about three-quarters of a mile north of the present city of Arcadia, Kansas.

Hathaway offered Howell $1,000 cash for his 320-acre claim, to which Howell agreed and gave him a new purchaser a permit which was passed on by the tribal chief. The permit was renewed each year after that until the Cherokee ceded the land to the Government. Hathaway then finished Howell’s log home and established a stage stop and tavern on the military road between Fort Scott, Kansas, and Fort Gibson, Oklahoma.

To secure the government land, which was part of the Cherokee Neutral Lands, Hathaway had to establish a post office which he did, naming it Hathaway.

In 1859, the name of the office was changed to Coxe’s Creek, and L. R. Jewell became postmaster.

When the Civil War began, Phil Hathaway, a pronounced Free-State advocate, tried to enlist in the Union Army but was disqualified due to a physical disability. On the night of May 20, 1864, Henry Taylor, a sheriff of Vernon County, Missouri, at the head of a guerrilla band of 80 well-armed and mounted men, entered the military road at Arcadia, Kansas and took Hathaway, prisoner. However, with other prisoners, he miraculously escaped, about five miles northeast of his homestead on the state line, when the band of bushwhackers was fired upon by a party of Wisconsin Union soldiers headed by George Pond. Taylor’s men then made a rapid retreat to his home in Missouri.

On April 23, 1867, the post office’s name was changed to Arcadia, for the ancient region of Arcadia, in Greece.

In 1871, Phil Hathaway moved from the double log cabin and erected a frame building about a half-mile south on the Howell tract.

The post office moved to the site of a railroad siding in about 1876.

By the early 1880s, the Kansas City, Fort Scott, and Gulf Railroad entered the county near the northeast corner, extending south through Arcadia, Coalvale, and Mulberry Grove to Litchfield.

The town has broad and clean streets lined on both sides with neat buildings. Among the business houses of Arcadia were five general stores, a hardware store, three blacksmith and wagon shops, a harness shop, a bakery, a shoe shop, a grist-mill, a grain elevator, a lumberyard, two drug stores, two hotels, and two churches. At that time, the town’s population was about 300.

Arcadia was issued a city charter in 1882 and was platted in 1883 by Lewis L. Jewell, who formed the Arcadia Town Company. Jewell also founded the first newspaper in Arcadia  — the Arcadia Reporter.

In 1910, Arcadia was a station on the St. Louis and San Francisco Railroad.

At that time, it had a bank, a good graded public school, a fire department, a weekly newspaper, planing mills, brick and textile factories, a hotel, several churches, and a population of 694. Communication with other places was maintained by telegraph and telephone.

Mining must have been very good in the next decade because Arcadia’s population grew dramatically to 1,175 in 1920. 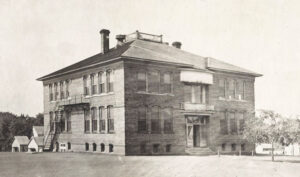 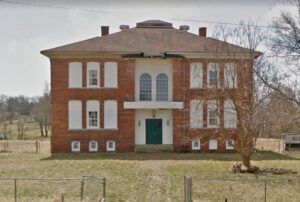 It appears that the old grade school in Arcadia, Kansas has been turned into a home today. Courtesy Google Maps.

In the next decades, the population gradually declined.

Today, Arcadia is a very small town comprised mostly of houses, faded sidewalks, and a few old business buildings. However it still boasts an active Christian church, a post office, a city hall, and a community center. As of the 2020 census, the population of the city was 254.

Arcadia is about 15 miles northeast Girard near the Missouri state line. 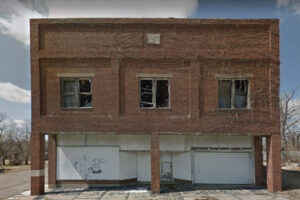