Arkansas City, pronounced Ar-kan-sas, is located in Cowley County, Kansas, at the confluence of the Walnut and Arkansas Rivers.

The site had previously been called home to a Wichita Indian village called Etzanoa, which flourished from 1450 to 1700. The village had an estimated population of 20,000. When Spanish conquistador Francisco Vásquez de Coronado’s expedition visited central Kansas in 1541, he dubbed the Wichita settlements “Quivira.” When New Mexico Governor Juan de Oñate visited in 1601, they called inhabitants Rayados, meaning “striped” in Spanish. The Wichita people were noted for the straight lines they tattooed onto their faces and bodies. 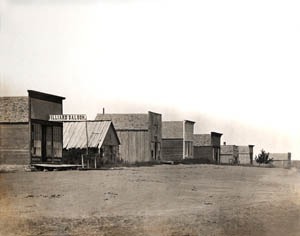 The founders of Arkansas City arrived at the site on January 1, 1870, and a settlement called Walnut City was platted the same year. However, when a post office was established on May 16, 1870, the name was changed to Arkansas City. G. H. Norton served as the first postmaster.

The first building erected was a log house by G. H. Norton. The second was C.R. Sipes’ hardware store, followed by a frame building as a grocery by L. Goodrich. The first general store was opened in 1870 by G. H. Norton, who bought a stock of goods and began business in their cabin. The first drug store was opened by Eddy & Keith; the first hotel by R. Woolsey, who also started a livery stable. H. D. Kellogg was the first physician, W. P. Hackney, the first attorney, and P. Beck the first blacksmith. In the spring of 1870, W. M. Sleeth set up a sawmill.

Although surrounded by bands of hostile Indians, the settlement was unmolested. This immunity was mainly earned through the efforts of Henry Norton, who arrived in 1870. His honesty in dealing with the Indians immediately won their friendship and, eventually, their unreserved confidence. He went to their villages unaccompanied and was permitted to see their religious ceremonies. The Indians visited the settlement frequently, buying supplies, and trading furs and horses at his invitation. Occasionally they came in their finest regalia and entertained the settlers with tribal songs and dances. The whites gave them colored beads, tasseled handbags, plumed hats, and barbecued meat in payment. 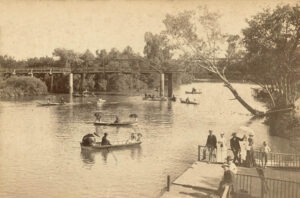 By the end of 1870, the settlement boasted several stores and houses, two sawmills, and a newspaper, the Arkansas City Traveler. The community in these years was a rendezvous for horse thieves who stole stock from settlers in Kansas and drove them to Oklahoma. Buffalo Bill Cody, then a U.S. Marshal, made the vicinity his headquarters during the early seventies.

The town was incorporated on June 10, 1872, and A.D. Keith was chosen as the first mayor. The same year, the Cowley County Bank was established, and the Walnut Mill was built on the Walnut River. Located about a mile northeast of the city, it was constructed by A.A. Newman and had a capacity of 100 barrels of flour per day. Power was furnished by an 80-horse-power engine and by four Chase water wheels. The cost of the mill was $20,000.

A new school building was erected in 1873 for $10,000. The Methodist Episcopal and United Presbyterian Churches were built in 1874. More churches followed. 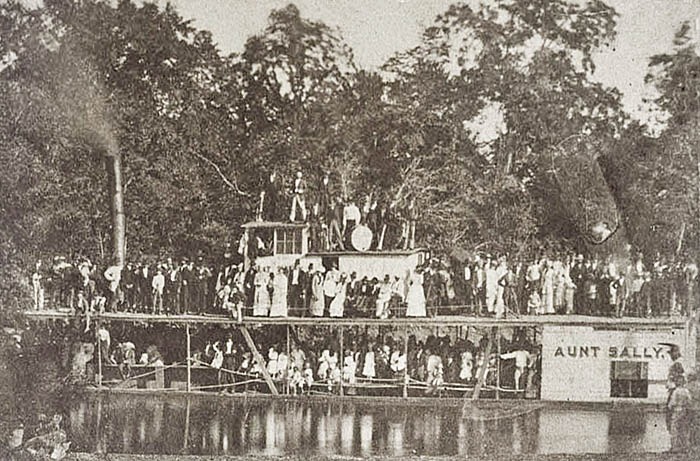 The steamboat Aunt Sally, the first to ascend the Arkansas River to Arkansas City, arrived on a Sunday morning in June 1878. Services were in progress at the village church, but at the first sound of the steamer whistle, the pastor and the congregation rushed out to welcome the boat. Local merchants, intent on developing an inland shipping point, promptly purchased the Kansas Miller. On its first trip, the vessel grounded on a sandbar. Subsequent journeys were unsuccessful, and the Kansas Miller renamed the Walnut Belle was converted into a pleasure boat.

For a few years, the growth was comparatively slow, but in December 1879, the Atchison, Topeka & Santa Fe Railroad completed a line to Arkansas City, after which the growth was more rapid and of a more substantial character. Following this road came the Kansas Southwestern, the Missouri Pacific, the Midland Valley, and the St. Louis and San Francisco lines, providing transportation facilities as good as are to be found in any city of its size anywhere.

With the advent of the railroads, manufacturing became an important industry. Water power was provided by a canal five miles long connecting the Walnut and Arkansas Rivers. 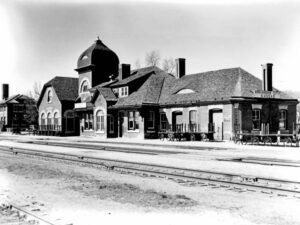 Another newspaper, called the Arkansas Valley Democrat, was started in July 1879 by C. M. McIntire. The Creswell Bank began business in September 1880. by that time, Arkansas City had a population of 1,012.

The growth of Arkansas City was stimulated in the 1880s by the discovery of gold in the region. Assays indicated rich deposits, and the community seethed with activity. However, mining operations revealed but little metal, and the boom soon subsided.

In 1886, two steel barges were constructed to navigate the Arkansas River. Soon, the steamers were carrying as much as 100,000 pounds of Kansas flour between Arkansas City and Fort Smith, Arkansas, on every trip. 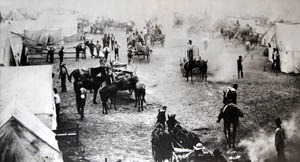 In 1889, Arkansas City was one of the starting points for the Oklahoma Land Run of 1889. This run began the disposal of Unassigned Lands left vacant after the Civil War. In the spring of 1889, most of the would-be settlers massed in camps at the Kansas border towns, mainly at the railroad towns of Arkansas City and Caldwell. As the morning of April 22, 1889, dawned bright and clear, an estimated 50,000 people surrounded the Unassigned Lands. It was a day of chaos, excitement, and utter confusion as men and women rushed to claim homesteads. The “Eighty-Niners claimed an estimated 11,000 agricultural homesteads.”

An even more exciting event occurred in 1893 when the renowned Cherokee Strip was opened. The prize on this occasion was 8,000,000 acres of fertile ranch and farmlands. The starting point was the Kansas-Oklahoma border – four miles south of Arkansas City. Some months before the big land race, Arkansas City was the rendezvous point of 100,000 eager settlers who made plans and “big deals” before the first pistol shots were fired, signaling the race’s start at noon on September 16, 1893. 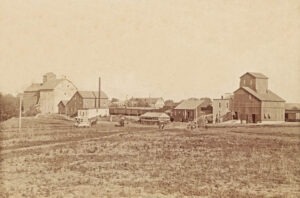 Afoot, on horses, in heavy lumber wagons, buggies, covered wagons, and all manner of horse-drawn vehicles, the settlers lined up to await the gunshot, which signified that the Strip was open. Impatient settlers inspected wagon wheels, harnesses, and saddles in a last-minute checkup. At high noon came the signal, and the boomers dashed across the line. For an instant, the row held unbroken, and then, as settlers on fast horses outdistanced the others, it splintered into a tangle of wagons, buggies, and shouting drivers.

By the early 1900s, Arkansas City had lost its frontier aspect and had become a conventional market town. The discovery of oil nearby in 1914 and the post-war years altered the economic course of the city. Indians, made rich by wells brought in on their lands in northern Oklahoma, came to Arkansas City to splurge. They came by train, on horseback, or even on foot and returned to their homes in gleaming new automobiles piled high with gaudy wares. 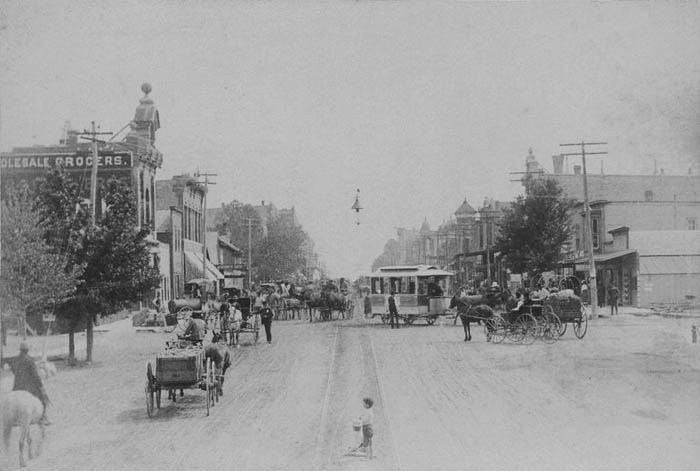 The public school system comprised four modern ward school buildings and a high school building that cost about $40,000. Several fine churches added to the city’s beauty, the jobbing trade covered a large territory, and the press was well represented by two daily and three weekly newspapers. By that time, the town was called home to 7,508 people.

In 1922, the Arkansas City Junior College was established. For 30 years, the college had facilities in the Arkansas City High School basement. In 1950, Galle-Johnson Hall began to be built, and ten years later, its name was changed to Cowley County Community College. Today, the school offers multiple majors and career pathway possibilities to prepare students for transfer to a four-year program or to enter the workforce with a two-year job-ready degree.

During the 1920s, Arkansas City had an active group of Ku Klux Klan. The group was primarily concentrated in south-central and south-east Kansas. The state shut down the group, and most Klans disbanded by 1927.

In 1928, the city’s official fall festival, Arkalalah, was inaugurated. This annual event still draws thousands of visitors each October and features a queen, a carnival, dozens of homegrown fair food vendors, and a spectacular parade. 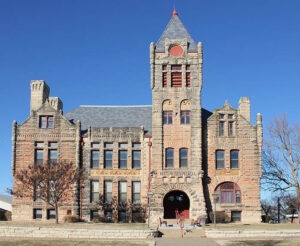 By the late 1930s, Arkansas City had two flour mills, a meatpacking plant, foundries, creameries, a sand and gravel plant, overall factories, and an oil field machine shop. It had also become a shipping and refining center for the area’s oil fields. Long lines of tank cars emerged from the city on its four railroads, and freight yards were piled high with incoming shipments of oil machinery and pipeline supplies. The business district had modern shops with tile facades and older structures of native limestone.

The city prospered through much of the 20th century, but by the 1980s, the community began to face economic challenges. The railroads shifted many of their crews to other stops; the old Rodeo meatpacking plant, which for a short time was Morrell Meats, closed. The only passenger train that served the city, Amtrak’s Lone Star, was discontinued. In 1996 Total Petroleum closed its refinery with a loss of 170 jobs.

By 2003 other large employers in Cowley County closed operations, including the Crayola plant closing with a loss of 400 jobs. The nearby Winfield State Hospital and Gordon Piatt Industries were also closed, with a combined loss of 973 jobs. 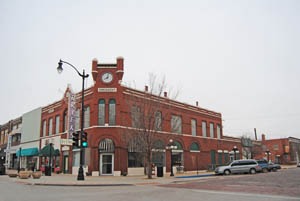 Today, the city has a population of 11,974. Arkansas City is three miles north of the Oklahoma border and 12 miles south of Winfield, the county seat.

The recent discovery of Etzanoa, the Lost City, has brought heightened interest to the museum, which offers tours out to the Etzanoa grounds. This place, called the “Great Settlement,” by Spanish explorers in 1601, had become lost in the mists of time. However, it has recently been rediscovered. Etzanoa was once inhabited by 20,000 ancestral Wichita Indians and is thought to be the second-largest settlement in North America in the early 1600s. 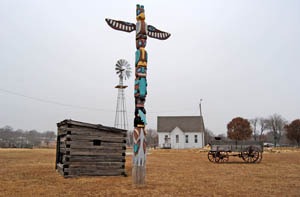 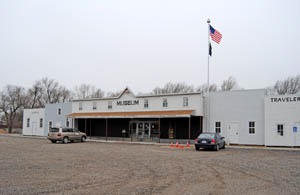