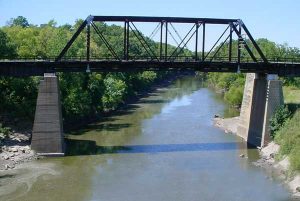 Situated in southeastern Kansas, the Walnut River has its source in two forks that rise in the northern part of Butler County. Cole and Durechon Creeks unite at a point about a mile southwest of the old village of Chelsea to form the waterway, which was known in the past as the “Little Verdigris River.”

It flows in a southwest direction past the cities of Eldorado, Augusta, and Winfield before making a turn almost due south and emptying into the Arkansas River south of Arkansas City in Cowley County. The river has several small tributaries, the most prominent of which are the Whitewater River on the west and the Little Walnut and Rock Creeks on the east.

The river is approximately 121 miles long, making its way through the Flint Hills region of Kansas. Upstream of El Dorado, a U.S. Army Corps of Engineers dam causes the river to form El Dorado Lake, along which a Kansas state park has been designated.