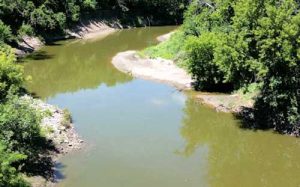 The Whitewater River, also known as Whitewater Creek, is a stream situated in southern Kansas.

The waterway rises in the southern part of Marion County about six miles west of the village of Burns, before flowing south and uniting with the Walnut River at a point about a mile south of the town of Augusta in Butler County. The stream has only one tributary of consequence — the West Branch Whitewater River, which has its source near the town of Walton in Harvey County and unites with the Whitewater a little north of the village of Towanda in Butler County. The length of the stream is about 35 miles long.

During the 1860s, a man named James R. Mead of Wichita had a ranch and trading post on the Whitewater River, where the town of Towanda now stands. In 1868 the Nineteenth Kansas Cavalry, while on the march to the Indian Territory, stopped at Mead’s Ranch for supplies on the evening of November 11th.