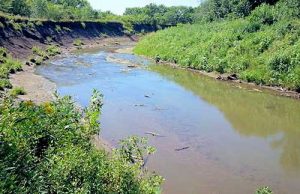 Barrett, Kansas, an extinct town today, was one of the oldest settled points in Marshall County.

The first white resident outside of the French traders and their Sioux families, was G. H. Hollenberg, who later founded the settlement of Hollenberg in Washington County, Kansas. Hollenberg located to this vicinity in 1854 and opened a store for the accommodation of the emigrants traveling along the California Trail. The next to settle on the Vermillion River were John D. Wells, D. M. Levitt, and Joseph Langdon were the next to settle in 1855.

In the spring of 1855, a colony of 60 people from Cadiz, Ohio, selected a five-mile square tract in the Vermillion Valley for a settlement. A post office was opened in August 1857 and named Barrett for one of the colonists, Albert Gallatin Barrett. H.W. Swift was appointed as the first postmaster. The same year, Mr. Barrett, in carrying out an agreement with the Ohio Town Company, set up and operated a sawmill, and put in a grist-mill. This mill was brought from Leavenworth to Barrett by ox team and at the time, it was the only one in the county. The town was also became known as Barrett’s Mill.

Religious services were first held in the sawmill, which was lighted by lanterns. School District No. 1 was organized in 1858 and a small schoolhouse, measuring 14×24 feet, was built, with the donated material and labor. After the school was built, church services were held in the building by “circuit riding” preachers.

A small store furnished some necessary supplies to the settlers. With a schoolhouse, saw and grist-mill, and a post office, Barrett became an
important place. It was a little settlement of kindly, hospitable pioneers, and a gathering point for people from all parts of the county.

During the years from 1856 to the breaking out of the Civil War in 1861, Barrett was the most prominent “Free State” settlement west of the
border counties. 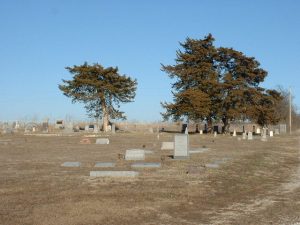 A.G. Barrett laid out the official townsite in 1868 and the next year, he gave the Central Branch Missouri Pacific Railroad 40 acres of land in consideration of their building a depot and sidetrack. At this time, $1,200 was donated by neighboring farmers to have Barrett named as a station.

In 1869-70 a new two-room, one-story limestone building was erected for a new schoolhouse at a cost $3,000 on the south side of the settlement. It was the largest one-teacher schoolhouse in the county. Today, this building is the only one that continues to stand in this old community and was listed on the National Register of Historic Properties in 1973.

Afterward, a few buildings were erected but the town never grew greatly in importance.

In 1910 the town had a money order post office and a population of 75 people. However, by 1917, many of the early-day settlers had passed away and with the influx of railroads into the county, much of the trade had diverted trade to the larger towns of the county. By that time, the community had but one store and the post office. The old mill had been partially dismantled and only the framework remained. Barrett’s post office closed in December 1940.

Today, all that is left today of this old town is the old stone schoolhouse and the Barrett Cemetery. The old stone school is located on private property on 19th Terrace between Wildcat and Yonder Roads, southwest of Frankfort. 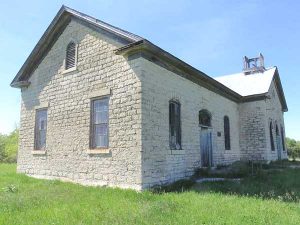 Old stone school in what was once Barrett, Kansas by courthouselover-Flickr