A long-closed high school in Bavaria, Kansas, by Kathy Alexander.

Bavaria, Kansas, is an unincorporated community and near ghost town located about nine miles southwest of Salina.

Bavaria was initially known as Honek, named for the first settler, Ernst Hohneck, who came to the area in 1865. A German, Hohneck immigrated to the United States in 1850 at the age of 22. He first made his home in Virginia before moving to Ohio and then to Kansas Territory in 1855, first settling in Wabaunsee County. In 1862, he was associated with Daniel Page and Joseph Lehman in the operation of a ranch at the Smoky Hill River crossing near present-day Kanopolis, Kansas. 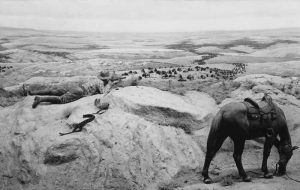 Their chief enterprise was the sale of buffalo hides and tallow transported to the Leavenworth, Kansas market at regular intervals. When he arrived in Saline County, he established Hohneck’s Trading Ranch, which included a brewery on Spring Creek.

With the arrival of the Union Pacific Railroad at Junction City, Kansas, in June 1866, the Fort Riley-Fort Larned Road became the far eastern leg of the Santa Fe Trail. Consequently, traffic past Hohneck’s Ranche was multiplied many times over by the thrice-weekly mail deliveries by the Barlow & Sanderson Company, which superseded the Kansas Stage Company’s weekly schedule, and the ever-increasing number of both military and civilian freight caravans. 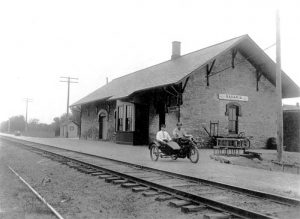 On March 31, 1867, troops under Major General Winfield Scott Hancock stopped at Hohneck’s Ranch for dinner, where the expedition officers were treated to a great fare. Correspondent Henry M. Stanley, who accompanied the expedition, described the meal:

“We stopped at Hohneck’s Ranche, our quondam friend, for dinner, who had already prepared, in the delightful anticipation of our visit, an elegant and plentiful repast, consisting of bona fide buffalo, deer meat, smoked ham, and quinces. We enjoyed it amazingly and therefore suggest to the belated travelers that they always stop at Hohneck’s Ranche when they come this way. Hohneck proved himself a gentleman and a scholar, and it was with some akin to sadness that we departed from the adobe mansion that he had himself built on the wild waste of the desert.”

However, the boom soon ended when the railroad pushed past his ranch to Fort Harker in the summer of 1867. Immediately, the fort replaced Junction City as the official depot of the U. S. Postal Service and the eastern terminus of the Santa Fe Trail. Overland traffic past the ranch ceased, but Hohneck found other ways to enhance his business. 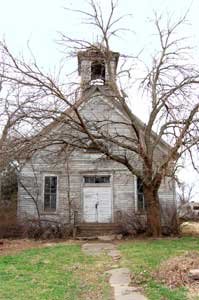 An old and unused church in Bavaria, Kansas, by Kathy  Alexander.

On July 8, 1867, a post office was established, and Ernst Hohneck was appointed postmaster. Because regulations didn’t allow a post office to be named for a person, Ernst Hohneck circumvented the prohibition by spelling the post office’s name “Honek.” In the same year, he constructed a two-story frame house that served as a residence, post office, and grocery store. Four years later, in February 1871, Hohneck platted a town named for himself at the ranch site. His plans for a town failed. However, in 1877, a man named E. F. Drake reorganized the town plan and named it Bavaria in recognition of Hohneck’s German heritage. The name of the post office was changed on January 8, 1880.

In 1883, Ernst Hohneck left Saline County and went to work for the land division of the Northern Pacific Railroad in St. Paul, Minnesota. In 1903 he moved to Spokane, Washington.

The house he built in 1867 stood for 72 years on the west edge of Bavaria before it was razed in 1939. This only reminder of his tenure in Saline County is a township road marker one mile east of Bavaria, which reads “Hohneck Road.”

In the early 1880s, the town was called home to about 150 people and boasted a drug store, a wagon shop, a blacksmith shop, a school, a syrup factory, and several houses. A man named John Geissler owned the only general store and a coal and lumber yard. There was no hotel, but Mrs. S. Terry kept a boarding house.

Though located on the mainline of the Union Pacific Railroad, Bavaria did not grow. By 1910, its population had dropped to 110. Its population continued to decline through the years as people moved to nearby Salina. Its post office closed its doors forever on January 1, 1986. As of the 2020 census, the population of the community and nearby areas was 60. 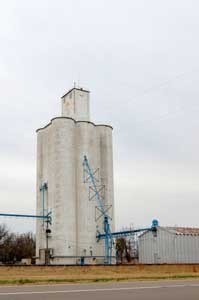