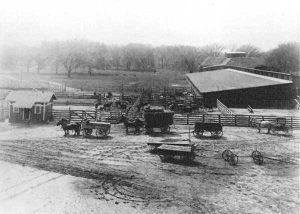 Bismarck Grove, Kansas, in Douglas County, was once one of the most beautiful natural parks in the state. An extinct town today, it was situated on the north side of the Kansas River at Lawrence.

For many years, Bismarck Grove was a favorite place for holding gatherings of all kinds. Among the historic meetings that were held there was the Quarter Centennial celebration of the organization of Kansas Territory in 1879 and the Old Settlers’ meeting in September 1884. When the Western National Fair Association was organized and incorporated in 1879, Bismarck Grove was selected as the place for holding the annual fair, and for several years, the exhibits of the association were given in the grove, which had been fitted up for a fairground.

There was never a post office at Bismarck Grove. In later years the park was utilized as a livestock farm.

Today, it is part of North Lawrence near the intersection of Lyon Street and North 9th Street.