Situated on the north bank of the Smoky Hill River in Ellsworth County, Kansas, Black Wolf got its start as a station on the Union Pacific Railroad in the late 1870s. Located halfway between Ellsworth and Wilson, the town also supported limited coal production in the 1880s, as well as numerous farmers and ranchers in the area. The town was said to have gotten its name from an Indian Chief named Black Wolf, whose tribe had a camp on Cow Creek to the north of the town.

In 1879, there was little of the town other than the railroad siding and the post office, which was established in April.

However, by the next year, several business buildings had been erected and streets laid out. A grain elevator was built in 1879 by two men by the name of Jung and Giessler. The O’Connell & Foote lumber yard was established which carried a full line of building supplies. The two also later built a hotel called the Wisconsin House, as well as a two-story building, which contained a mercantile store on the lower level and housed the post office. A farmer named John Riley soon began to sell farm machinery and later built a livery stable. Other businesses included a lime kiln called Graham & Beths, and a blacksmith shop owned by M. Mahoney. The Black Wolf School was built in 1880.

The Black Wolf Coal Mine was located two miles south of the town in the bluffs near Black Wolf Creek. This and other mines located along the Smoky Hill River, were never large operations, as the coal was situated near the surface and sold only locally. However, local coal would be utilized for several decades.

By 1910, the town boasted a population of 100 people, a money order post office, telegraph and express offices, telephone connections, a grain elevator, and good local trade. However, just ten years later, the population had dropped dramatically and the town was already working to revive itself. A sign was posted in 1920 stating: 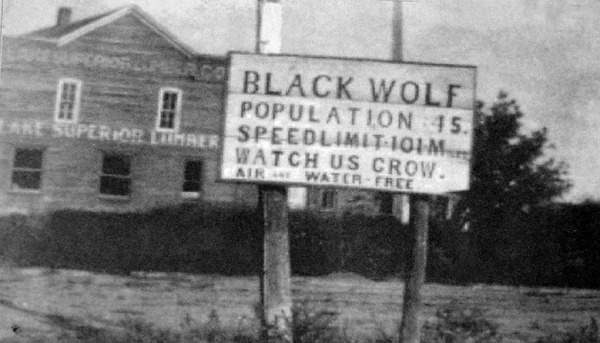 In the 1920s, Black Wolf gained national attention when two masked robbers walked into the Black Wolf State Bank and demanded cash from cashier Ray Artas, who was at the bank alone. At the moment of the robbery, Mrs. Artas, who worked at the bank as a bookkeeper, arrived. Her husband told her to leave “Fast! This is a hold-up!” However, she refused, thinking her husband was joking. The robbers locked the Artases in the vault and made their escape with $500 in cash.

Though the town of Black Wolf had suffered previous floods, the worst came in 1938 when high floodwaters descended from the Smoky Hill River. Though the elevators and the Black Wolf store tried to pump the water out of the places, it was impossible, as the flood reached a crest of 12 feet above the river bridge. For days, the only way to get around the town was by boat.

For years, Black Wolf was noted for its Saturday night dances. In the summer, they were held on outdoor platforms, in colder weather inside a machinery barn. These large dances usually lasted until daybreak so the people could see their way home. When electricity finally arrived in Black Wolf in 1945, the popular dances began to break up by about 2:00 a.m. Sunday afternoons were slated for baseball games, which were held in a cow pasture just south of the Black Wolf Bridge.

But, like many other small farming communities, Black Wolf’s heydays would soon come to an end. With better roads and automobiles, more and more people began to drive to Ellsworth to do business, and the few retailers in the small town began to leave. When the Union Pacific Railroad depot closed in 1952, it was the final death knell for the town. The building was later sold and moved out of town in 1956. On August 31, 1953, the post office closed its doors forever.

The following year, the Black Wolf State Bank was closed and the general store auctioned off its inventory and closed. In 1962, the Black Wolf Elevator for the Wilson Flour and Milling Company closed. The closed Black Wolf store was gutted by fire in 1997, the old Black Wood Bank building was razed, and in 1999, the Black Wolf Barn and Dance Hall were moved to a private residence near Ellsworth. The Black Wolf School, built in 1913, was moved to the Hodgden Museum Complex in Ellsworth and can still be seen today.

Black Wolf is now only a ghost of its former self, with no business buildings. However, there remain several residential homes, a Co-op Grain Elevator, and the still-active tracks of the Union Pacific Railroad