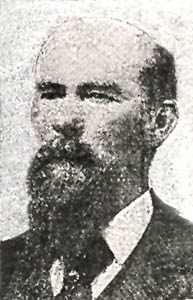 Operated by a flamboyant and colorful man named Donald R. “Cannonball” Green, the Cannonball Stage Line connected the railroad to towns across southwestern Kansas and into the untamed red lands of Oklahoma. Green started his first stage service in Kingman, Kansas in 1876, which initially ran through Pratt to Coldwater and later to Greensburg, a town he helped found in 1886 and was named for him.

Born in Kentucky in 1839, Green lived in Wichita, Kansas, before the construction of the Wichita & Western Railroad.

In 1876, Green opened a small livery stable in Kingman, Kansas. He had been a champion stagecoach driver and soon founded a stage line to transport people through the region. He insisted on speed, and his stage line expanded rapidly. The stage line was named the Cannon Ball, inspired by the old song Wabash Cannon Ball which was a powerful locomotive.

Green’s stage line served areas not reached by the railroad, and for a few years, he also carried the mail from Wichita to Kingman. One of the contracts of this stage line was to carry the Wichita Eagle newspaper from Wichita to various towns to the west. Marshall M. Murdock, the founder of the Wichita Eagle, was the source for the agreement and was a close personal friend of Cannonball Green. 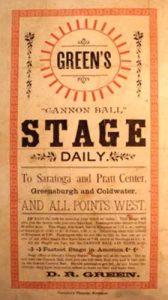 The stage route, known as the Cannonball Highway, started on Wichita’s West Street, ran west along Maple Street for 11 miles, turned south for one mile, and then hooked up with what is now U.S. 54 west to Kingman.

Known for their speed, Green’s coaches were pulled by teams of six or eight horses changed every eight to ten miles. His teams and coaches could make the run in about 10 hours, with relay stops every 20 miles. The coaches were painted yellow and green.

More than just a driver, Green was an advisor and teacher, sharing with passengers his knowledge of southwestern Kansas and the prairie landscape. Green’s stage line grew into 70 vehicles and 1,000 horses, covering 1,500 miles of Kansas plains.

Standing some six feet tall, Green was described as a flamboyant, boastful character who liked to dominate a crowd while twirling his diamond-studded watch chains. He was also characterized as a whole-souled genial westerner who universally became a traveling public’s favorite.  He took great pride in the speed of his coaches and advertised that even “Father Time” couldn’t keep up with the “Cannonball.”

In those days, Green said the price of a Concord Coach was $1,200.00 and mules as high as $400.00 apiece. His coaches covered 100 miles a day. In addition to the Concords, the lines were provided with many smaller stages or coaches; “but when a newspaper editor showed up,” he said, “I would always give him a seat in one of the big coaches … I received thousands of dollars worth of advertising from these editors.” At one point, Green’s business operated 70 coaches and over 1,000 head of horses. 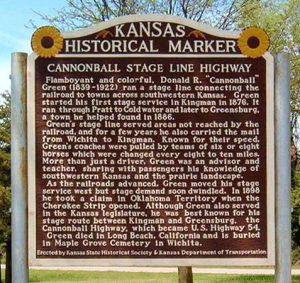 Cannonball Stage Marker on US 54 just east of Greensburg, Kansas.

But the flamboyant Green would also take no flack from customers. He once ejected Carrie Nation from his coach after she snatched a cigar from his mouth and tossed it away.

Cannon Ball Green’s business was exceedingly prosperous from about 1870 to 1880. As small settlements were springing up across the plains, “Cannonball Green” was instrumental in the organization of Greensburg, which was named for him.

The prosperous days of the Cannonball route wouldn’t last; however, as the railroads moved west, the demand for stage service soon dwindled, and Green began to look for other business endeavors. In 1889, he was elected Kiowa County’s second representative in the Kansas legislature.

Later, in 1898 he took a claim in Oklahoma Territory when the Cherokee Strip opened and became one of the founders of Pond Creek and a county officer.

Green died in Long Beach, California, in 1922 at the age of 83 and is buried in Maple Grove Cemetery in Wichita, Kansas.

In 1997, the state renamed a 60-mile stretch of U.S. 54 from Kingman to Greensburg the Cannonball Stage Line Highway, honoring Cannonball Green.

“All my stages are fast, but the Cannon Ball 4-In Hand is the FASTEST STAGE IN AMERICA…. Get up and take the Cannon Ball, then you can tell them East that you had a fast ride. Should passengers get left, do not blame the drivers, they have imperative orders to leave on time and make time.”  — D.R. Green, 1880. 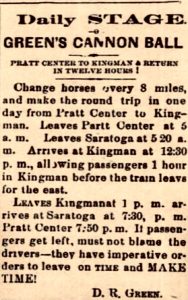 Stagecoaches of the American West

Tales & Trails of the American West