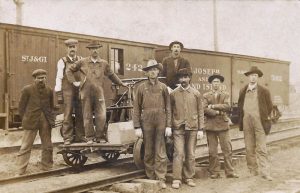 Carden, Kansas, an extinct town of Marshall County was situated on the St. Joseph & Grand Island Railroad. It was founded in about 1902 on the farm of Mrs. Ottilia Carden, for whom the town was named. The first building in town was a grain elevator erected by J.E. Andrews. Ed Crevier next built a store and a blacksmith shop. The town gained a post office in 1903.

In 1910 it had telegraph and express offices, a post office, general lines of merchandising, and a population of 50.

In 1917, the hamlet was described as a “busy little town”, with 25 trains running through daily and the community shipping from 200-300 cars of grain and stock each year. However, the town was called home to only four families. There was no church, but there was a small school. Its post office closed its doors forever in 1923.

The town was located four miles from Marysville.