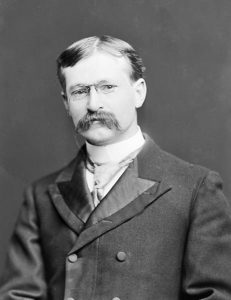 Charles F. Scott was a journalist and member of the Kansas Congress.

Charles Frederick Scott was a native of the Sunflower State, having been born on a farm in Allen County, Kansas on September 7, 1860. His early education was acquired in the district schools, after which he entered the University of Kansas, where he graduated with the Bachelor of Science degree in 1881 He received his Master’s degree some years later. Upon leaving college, he spent about 18 months in New Mexico, Arizona, and Colorado, returning to his native county in the fall of 1882.

He then bought a small interest in the Iola Register; became the sole proprietor of the paper five years later, and in 1897 began the publication of a daily edition. In 1891, he was appointed a Regent of the University of Kansas and served in that capacity for 12 years. In 1892 he was elected to the state senate as a Republican, and in 1896 was one of the presidential electors on that ticket.

Mr. Scott married May B. Ewing in 1893. He was elected to Congress in 1900; was four times re-elected, serving 10 years in all, and was defeated for the nomination in 1910 by the late Alexander C. Mitchell of Lawrence. He tried again in 1928 but was again unsuccessful. He then resumed newspaper work until his death in Iola, Kansas on September 18, 1938. 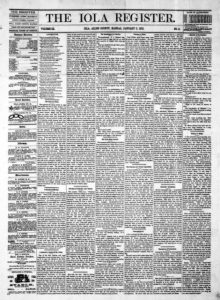