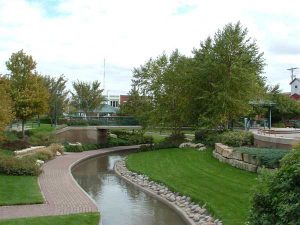 There are actually two waterways in Kansas that bear the name Cow Creek, one of which rises in the central part of Crawford County and flows southward through the counties of Crawford and Cherokee until it empties into the Spring River near the city of Galena.

Another and more important Cow Creek rises in the northern part of Barton County and flows in a southeasterly direction through Rice County and to Reno County, its waters falling into the Arkansas River a little below the city of Hutchinson. This creek was crossed by Lieutenant Zebulon Montgomery Pike near the present town of Claflin on October 10, 1806.

In 1863, “Buffalo Bill” Mathewson opened a trading post next to Cow Creek Crossing on the Santa Fe Trail. His hand-dug, 34 foot deep, stone-lined well that served the U.S. Calvary and Santa Fe Trail travelers have been preserved at this site, which is located four miles west and one mile south of Lyons, Kansas. 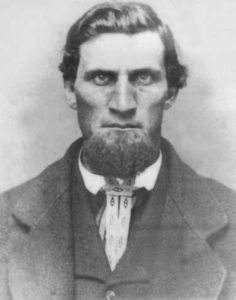 In the latter years of the Civil War, some troubles with the Indians occurred along Cow Creek. For five days in July 1864, 600 Indians besieged a trading post near the well and a wagon train nearby. When the attackers tried to overrun the post, “Buffalo Bill” Mathewson fired a small cannon into the midst of several on horseback and afoot, ending the siege.

On the evening of December 4, 1864, a small escort of the Seventh Iowa Cavalry, with a wagon loaded with ammunition from Fort Harker and bound for Fort Zarah, went camped on the bank of Cow Creek, about 15 miles east of Fort Zarah.

Soon after they settled, the troops were attacked by a party of Indians, who crept up under cover of the creek bank. The driver of the team and one soldier were killed, and the others fled, three of them finally reaching Fort Harker. Captain Theodore Conkey of the Third Wisconsin Cavalry, commanding at Fort Zarah, sent out a party of 25 men and brought in the wagon, though about one-half of the ammunition was damaged. 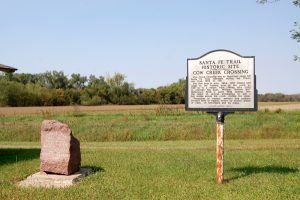 Cow Creek Crossing, on the Santa Fe Trail in Kansas by Kathy Weiser-Alexander.

A government train bound for Fort Union, New Mexico, was attacked by Indians on Chavis Creek on June 9, 1865. Lieutenant Jenkins, with 60 men, hurried up from Cow Creek and followed the marauders to the Arkansas River, but they got away, having captured 101 mules, 3 horses, and 75 head of cattle. Five days later the westbound overland coach, escorted by six men, commanded by Lieutenant Jenkins, was attacked a few miles west of Cow creek station. Jenkins held on until reinforcements arrived, when he drove the Indians to the river, killing and wounding 15 without the loss of a man.