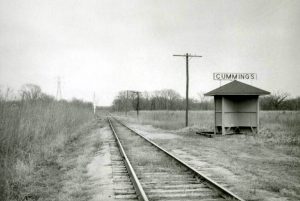 The town was established in Center Township along the Atchison, Topeka & Santa Fe Railroad in 1872. Robert Kennish was the first resident who settled there in November 1872 and opened a store; and on December 1, 1872, a post office was established in the store, and Kennish became the first postmaster. Kennish also served as the railroad station agent for many years. The town was platted by Williams Cummings the same month and was initially called Cummingsville. The original plat provided for two streets — Market and Main.

A Methodist church was built in 1880, and the first school was taught that winter. By the early 1880s, the town had several businesses and was called home to about 70 people. On September 21, 1883, Samuel C. King filed another plat, creating an addition composed of four blocks. In June 1884, the town and post office’s names were officially shortened to Cummings.

By 1910, the village had grown to about 175 people and supported a money order post office, telegraph station, general store, and school. The town also boasted a bank, several good stores, a cream station, and a grain elevator by the end of the decade. However, in the following decades, the population fell.

The Cummings Elementary School closed in 2010. Though Cummings is a very small town, it still has a post office, and two churches continue to serve area residents — the United Methodist Church and the Christian Church.

The small community is located southwest of Atchison on U.S. Highway 59. 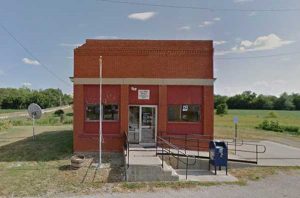