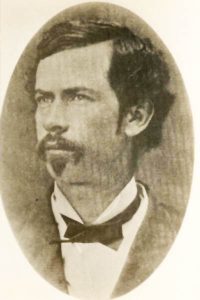 Daniel Woodson was the first secretary and several times acting governor of the Territory of Kansas.

Woodson was born in Albemarle County, Virginia on May 24, 1824. He was raised on a farm, received a limited education in public schools, and while still a boy, he began learning the printer’s trade. He became an expert editor,  took an active interest in political affairs, developed considerable ability as a writer on questions of public policy, and in time was made editor of the Lynchburg Republican, one of the influential Democratic newspapers of Virginia. His editorials attracted wide attention and were no doubt largely responsible for his appointment as Secretary of Kansas Territory in 1854.

In October of that year, he arrived at Leavenworth and passed the remainder of his life in Kansas. At different times during his term as secretary, he was called upon to exercise the functions of the Chief Executive. The first of these was in the spring of 1855, while Governor Andrew Reeder was absent from the territory. After Governor Reeder’s removal, he acted as governor until the arrival of Governor Wilson Shannon. Again, in the spring of 1856, he served as governor while Governor Shannon was in St. Louis, Missouri, and after Shannon’s resignation, he acted as governor until the arrival of Governor John Geary. From March 12 to April 16, 1857, Governor Geary having retired from the office, Woodson once more discharged the executive duties.

On April 1, 1857, he was appointed receiver of the Delaware Land Office but continued to act as governor until the 16th, when he was succeeded as secretary by Frederick P. Stanton. His record as Receiver of the Land Office is that of an efficient and painstaking official. Upon retiring from this position, he engaged in farming for about 12 years in Leavenworth County. At the end of that time, he moved to Parker, Kansas where he established a newspaper. This venture proved to be unsuccessful from a financial point of view, and he entered the employ of the Coffeyville Journal. For 12 years he served as City Clerk of Coffeyville.

Woodson was a strong pro-slavery man in the early days of Kansas’ existence and he sometimes did things that aroused the anger of the opposition. He was always conscientious; however, in the discharge of his official duties as he saw them, and there was never a word against his habits in private life. He died on October 5, 1894, at the home of his son at Claremore, Oklahoma where he had gone in the hope of regaining his health.