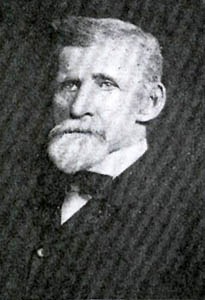 David W. Finney was a farmer, miller, and Kansas legislator.

Finney was born in Parke County, Indiana on August 22, 1839. He received a limited education in his native state, served through the Civil War as a member of Company A, Eighty-fifth Indiana Infantry, and in 1866 became a resident of Woodson County, Kansas.

Since the time he became of legal age, he took an active part in politics as a Republican and in 1867 he was elected to represent Woodson County in the Kansas Legislature. He was frequently called upon to act as a delegate to state or district conventions; was a state senator from 1876 to 1880, representing the district composed of Woodson and Coffey Counties; was president of the senate when the first prohibition law was passed; was the receiver of the Topeka Land Office for about three months in 1877; was Right-of-Way Agent for the Atchison, Topeka & Santa Fe Railroad for a time, and in 1882 was elected Lieutenant-Governor. The legislature of 1883 changed the name of Sequoyah County to Finney in his honor. After his term as Lieutenant-Governor, he became the senior member of the firm of Finney & Co., operating a large flour mill at Neosho Falls. He died on November 1, 1916, and was buried at Neosho Falls.