Situated along the Neosho River in northeast Woodson County, Kansas, Neosho Falls is the oldest town in the county. A semi-ghost town today, this small town with less than 140 people was once the county seat of Woodson County and described as the most important city in the area.

Its name was taken from the nearby Neosho River, coupled with “Falls,” when one of the first works of early settlers was to build a dam across the rapids, creating the small torrent of water over the dam that still exists today. The settlers who would establish the city were Colonel National S. Goss and Isaac W. Dow, who arrived in the area on April 6, 1857, from Iowa. In a one-horse rig, the two skirted the Coffey County line, and just west of where Neosho Falls would be built, found the cabin of Judge John Woolman. The only other person living in the area was a man named John Chapman, who resided on Spring Creek, just north of the Falls.

At that time, Woodson County was the reserve of the New York Indians and not open to official settlement. This, however, did not stop more settlers from coming to the area. In August, another settler named E, Fender built a cabin on the north bank of the river, and the area’s first physician, Dr. A. McCartney, and others came in the Fall. That same year, a post office was established, and National Goss became the postmaster, a position he held for two years.

Ever the entrepreneur, National S. Goss, along with T. L. Clark, B. F. Goss, and William Brown, built a sawmill on the north side of the river in 1857. Soon after it was built, National S. Goss and T. L. Clark would become its sole owners and expand it two years later. 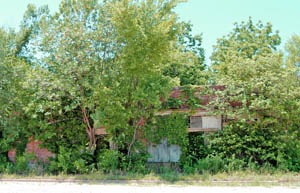 Once a prospering business, this abandoned building can barely be seen behind the trees and vines, by Kathy Alexander.

In the Spring of 1858, more settlers arrived, including two men by the names of Ruggles and Stevens, who built a cabin on the south bank of the Neosho River and began to sell goods. Later in the year, the two built a frame store building and the Falls House Hotel. Before long, another store building was erected by J. Fisher, who put in a stock of drugs.

Though the land was still part of the New York Indian Reserve, it was never occupied by any New York tribes, their only settlement being a temporary one near Fort Scott. Finding that the Indians would not settle on the reserve, the Woodson Board of County Supervisors began to organize the county in May 1858. On May 22, the men met at Neosho Falls and passed an order to conduct all county business in that settlement. That same month National S. Goss & Co. donated a jail building to the county to use for as long as Neosho Falls should remain the county seat. In August, the Board of County Supervisors again met at Neosho Falls. It proceeded to lay off the county into the townships of Neosho Falls, Liberty, Owl Creek, Belmont, and Verdigris. That same year, the first school was taught in the private property of E. H. Curtis, who afterward figured in the war as the Colonel of an African-American regiment.

In 1860, the U.S. Government made the land available for sale and homesteading of the lands that had been part of the New York Indian Reserve. News of this movement quickly circulated throughout the county, and the squatter settlers hastened to the land office to make the appropriate entries.

The first newspaper in the county was the Frontier Democrat, which was started in October 1869 by Isaac Boyle, who published the paper at Neosho Falls until January 1870, when it was sold to William H. Slavens who changed the name to the Neosho Falls Advertiser.

A public schoolhouse was built in 1869, and the first classes were taught in 1870 by I. S. Jones, who would later become a Probate Judge of Woodson County. 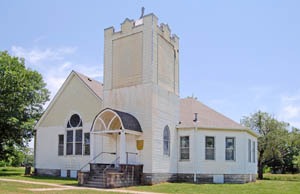 Though there were once several churches in Neosho Falls, the only one left today is the Methodist Church, Kathy Alexander.

The year 1870 was a busy one for Neosho Falls; as the town was incorporated, Isaac W. Dow started a bank, and the Union Pacific Railroad pushed through town, establishing a depot and a large storehouse in the southern part of the town. It later became the Missouri, Kansas & Texas Railway. That same year, the Falls House, the only hotel in town, was practically rebuilt and enlarged dramatically, and the first churches were built in the city.

Elections for city officers were held in the early part of 1871. By this time, the school building erected just two years early had already proved inadequate, and a large addition was made to it at the cost of $500. The following year another building was also added.

In the meantime, the newspaper changed hands and management several times and became the Woodson County Post in January 1873. That same year, the sawmill, which had since passed into the hands of Cobert & Cozine, was sold to W. L. Parsons. Another mill – a woolen manufacturer was built the same year on the south side of the Neosho River by the Hillings Brothers. That year, Isaac Dow’s bank failed, leaving the town without one for several years. 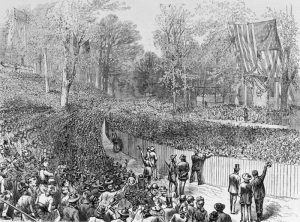 In 1876, the American Hotel, which had been built some years previously, was closed as it stood too far from the business center. It was moved nearby the railroad tracks and converted into a freight warehouse. Another hotel, the Pierce House, also burned that year and was never rebuilt. 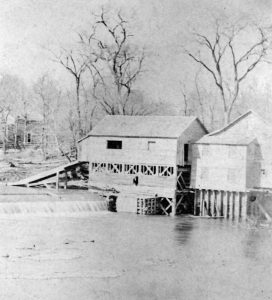 The largest enterprise was the Neosho Valley Fair, held here in 1875. Four counties participated—Allen, Anderson, Greenwood, and Woodson—and it influenced the area’s development. The fair gained a reputation far and wide, and in 1879, guests included President Rutherford B. Hayes, his wife, General William T. Sherman, and several state officers.

Neosho Falls reached its peak population of 1,200, but over the next several decades would continue to fall.

In 1881, the grist mill was rebuilt with a substantial 30×36 two-story building. This mill had a capacity of 100 barrels of flour per day. The following year, the woolen mill was sold and never reopened. However, 1882 also brought a new bank to town, started in August by Haughwout & Goodrich.

By the turn of the century, Neosho Falls was described as one of the important towns of Woodson County. It was a significant transportation center located at the junction of the Atchison, Topeka & Santa Fe, and the Missouri, Kansas & Texas railroads and on the Neosho River. At that time, the town boasted several retail businesses, a couple of banks, and manufacturing facilities, including flour mills, sawmills, and sorghum mills. The Woodson County Post newspaper was still in circulation. By this time, oil had also been discovered in the vicinity, bringing much prosperity. In 1910, the town had a population of 571. 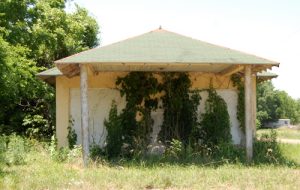 This old gas station hasn’t seen a customer in many years, Kathy Alexander. 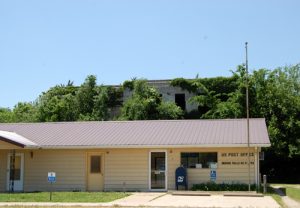 However, in the first half of the 20th century, Neosho Falls began to experience one setback after another. As electricity replaced water power, many of the mills were closed down, and though a hydroelectric plant was built, its tenure was short, and it was soon abandoned. The city was struck with a disastrous flood in 1926, which caused one death and tens of thousands of dollars in damage. Like so many others, the Great Depression hit the town very hard, and Neosho Falls lost its only newspaper in the 1930s and its only bank. In 1935, the Santa Fe Railroad pulled out of the town, though it was still left with Missouri, Kansas & Texas Railway line and depot.

Prosperity returned to Neosho Falls when new oil was struck south of town in 1937. Two years later, anticipating a return to prosperity, a large, combined elementary and high school was built. But, for Neosho Falls, re-growth wouldn’t last. A devastating flood destroyed much of the town in 1951. 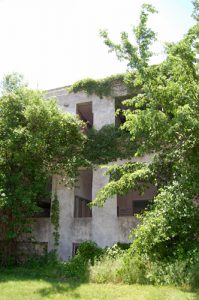 A testament to concrete, the old school continues to stand, though the sounds of children’s voices have been gone for decades, Kathy Alexander.

In 1957 the Missouri, Kansas & Texas Railway pulled out of the area, and the population continued to fall. The high school closed in 1961, and the grade school in 1969.

Today, this small burg has a population of about 135 people. Though long past its peak activity, it operates a post office, a church, a Senior Center, a community building, and one retail business – a tavern and several oil businesses with leases that continue to produce. One resident tells us, “Neosho Falls may not be the “boom town” that it once was, but we like it just the way it is.”

Neosho Falls is located about 20 miles northeast of Yates Center. From there, go east to Piqua on Kansas Highway 54, turn north on Xylan Road for about 4 miles, left on 180th Road for one mile, and right on Willow Road for 1.3 miles to Neosho Falls.