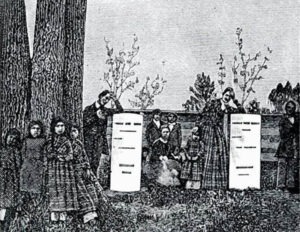 Deaths at the Wea Mission.

David Lykins was a physician, missionary, and member of the first Territorial Legislature of Kansas.

He opened the Wea Baptist Mission about one mile east of present-day Paola, Kansas in 1844 and continued there until 1857. David and his wife, Abigail Ann, along with fellow instructor Sarah Osgood, taught the Indian children in the area. David and his partner, Dr. Woodson Hoover, also practiced medicine together at the mission. In addition to the Wea Indians, they also treated Kaskaskia, Piankashaw, and Peoria Indians in the area.

In 1852, Lykins’ wife Abigail, their six-year-old son, Charles, and fellow teacher, Sarah Osgood died. Though the cause of their deaths is not documented, it is suspected that it was an illness such as smallpox, cholera, or typhoid fever. That year, the Baptist Conference gave him an additional duty, placing him in charge of the Potawatomie Baptist Manual Labor School, near present-day Topeka.

In 1854, Lykins helped draft an Indian Treaty, which was signed by President Franklin Pierce and later resulted in the removal of the Indians to Oklahoma.

Lykins was an ardent pro-slavery man and advocated the annexation of Cuba as a slave state. At the first territorial election on March 30, 1855, he was elected a member of the legislative council from the 4th district. He stuck to his missionary work, however, and did not join in the military or political efforts of his fellow legislators.

In 1856 an assistant was sent to help and David Lykins was made “General Superintendent of all the Baptist Missions in the Kansas Territory.”

After the Free-State men took power in Kansas, Dr. Lykins gave up politics, left the territory, and died in Denver, Colorado on August 13, 1864. His body was returned to Kansas where he is buried in the Paola Cemetery in Miami County.

Miami County, Kansas was originally named Lykins in his honor. It was later changed due to his pro-slavery views, and he was asked to leave the county.