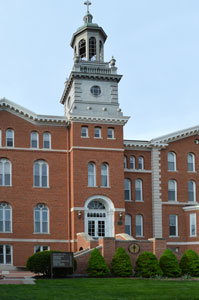 The University of St. Mary, Leavenworth, Kansas by Kathy Alexander.

Delaware City, Kansas in Leavenworth County was founded in the summer of 1854. One of Leavenworth’s early rivals, it was first settled by L.F. Hollingsworth, George Quinby, William H. Spratt, James Bruce, J. M. Churchhill, C. C. Redmon, and others, from Platte County, Missouri. A town company was organized with S. B. Prentiss as president. It consisted of 320 acres, platted, and was soon platted. Within no time it was a prosperous, growing town. Among the earliest settlers in the township were R. C. Foster, David Churchill, Eli Macamer, John W. Loar, H. T. Green, G. W. Gardner, Chief Justice S. D. Lecompte, B. H. Twomby, and others.

Predating the establishment of Delaware City, Catholic priests founded an Indian mission here in 1848. In 1851 the location was the site of the first cathedral west of the Missouri River. This was the “log cathedral” of Bishop John Baptist Miège, S.J., Apostolic Vicar of Kansas. When the Potawatomi Indians left, the Jesuits turned it into a boarding school for boys. In 1858, the Sisters of Charity arrived in Leavenworth and began teaching boys and girls. One year later, they created St. Mary’s Institute, a small educational institute for women, in downtown Leavenworth. In 1870, Saint Mary’s was moved south to Deleware City and was renamed St. Mary’s Academy.

Located on a beautiful elevation commanding a view of Leavenworth and the Missouri River, the three-story brick academy building was a spacious and imposing structure. By the 1880s it contained large and well-ventilated dormitories, toilet rooms, a grand study hall, numerous recitation rooms, music and drawing rooms, a large refectory and recreation room, and an infirmary and dispensary. Encompassing 120 acres of land, it was described as one of the most desirable educational institutions in the West. Today, the four-year

college is called the University of Saint Mary. Though it was originally a school for women, the school is now coeducational. The mother house of the order is also on the premises. At one time the nuns’ property had its own post office, Xavier, Kansas, the name honoring St. Francis Xavier.

On March 25, 1878, Deleware City’s post office closed. By the early 1880s, Delaware City consisted of only a few houses, a Catholic church, a district school, and about 50 people. Soon, it was absorbed by Leavenworth, Kansas.