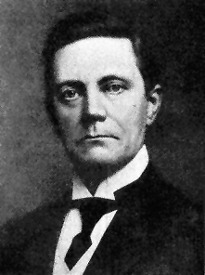 Edward Wallis Hoch was born in Danville, Kentucky, on March 17, 1849, to Edward C. and Elizabeth Stout Hoch. He had already gained a reputation as a renowned public speaker and writer. Before graduating, he left college to enter a newspaper office where he spent three years learning the printer’s trade.

He then came to Kansas and settled on 160 acres of land near Florence, in Marion County, where he engaged in farming. However, the fascination with the newspaper office was too strong to be resisted, and in 1874 he gave up farming and bought the Marion Record. That was the year of the great grasshopper plague, and for some time, his newspaper struggled. However, once the grasshopper crisis was over, his business began to improve, and by 1876 he had paid his debts.

On May 23, 1876, he celebrated his success by marrying Sarah L. Dickerson of Marion. Hoch soon became one of the state’s active editors in proclaiming Republican doctrines, which brought him into prominence with the party. In 1888, he was elected to the State Legislature’s lower house, and in 1892 was re-elected. His reputation in the legislature led to his nomination for governor. In 1904 he was elected and, at the close of his first term, was re-elected.

He retired from the office in January 1909, when Governor Stubbs succeeded him. Afterward, he devoted the greater part of his time to the lecture platform and passed the active management of his newspaper to his son, Homer Hoch.