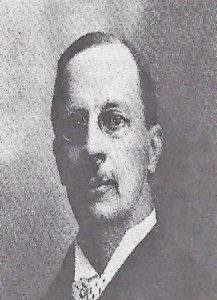 Edward Winslow Wellington a pioneer and businessman of central Kansas who was a founder of and essential in developing the cities of Carneiro and Ellsworth.

More familiarly called “E.W.,” Wellington was born in Cambridge, Massachusetts, on February 4, 1853, to lawyer and teacher Ambrose and Lucy Jane Kent Wellington. Edward received his elementary education in public schools and, afterward, attended the Latin school in Boston, Massachusetts. He then went to Harvard University, graduating in1874. After leaving college, he began to study law in his father’s office and was admitted to the Massachusetts bar in 1877. That same year, he headed west, spending some time in Denver, Colorado, before arriving in Saline County, Kansas. He then briefly operated a sheep ranch near Tescott before purchasing 12,000 acres of land in Ellsworth County for his own sheep ranch. Naming his property the Monte Carneiro Ranch, Carneiro meaning sheepfold or mutton in Portuguese, it was one of the largest ranches in central Kansas. He soon built many houses and buildings to accommodate himself, friends, and employees. 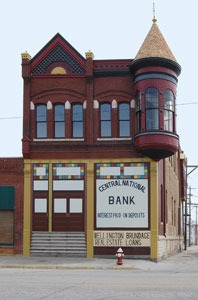 Wellington and Brundage building in Ellsworth, Kansas by Kathy Weiser-Alexander.

In 1882, he, along with other ranchers in the area, established Carneiro, about 12 miles west of Ellsworth, as a livestock shipping point. Five years later, Wellington moved to Ellsworth in 1887, where he invested heavily in real estate and erected more business blocks and residences than any other man in the town until that time. He was the first to install steam heat in his buildings and the first to provide cement sidewalks. He also owned and operated the sewerage system of the town. In addition to his large land holdings and buildings, he also operated the company of E. W. Wellington & Son, which handled insurance, loans, and an abstract office.

In addition to the many homes he built in Ellsworth, he also built his own home, which became one of the city’s showplaces. Complete with three parlors and a 20×30 foot dining room, the home was strategically placed on a hill and was the largest house in town. Edward’s wife Clara became a socialite in the city, hosting elegant balls and dinner parties. The home still stands on Forest Drive in Ellsworth. The Insurance building in downtown Ellsworth, also called the Wellington and Brundage building, was built by Wellington in 1887. It is now slated to become the future home of the National Drover’s Hall of Fame.