Effingham, Kansas, located in central Atchison County, got its start soon after the Central Branch of the Missouri Pacific Railroad was built.

Before establishing the town, there was a settlement in the area for several years and was a flourishing trading point. A post office was allegedly established in this community in 1866. 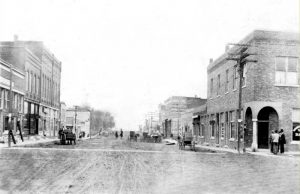 One of the first merchants in the fledgling city was P. J. O’Meara, who moved his grocery trade from Atchison and built a stone building on the northeast corner of Main and Howard Streets. On January 20, 1868, a post office was established in the store, and P.J.’s brother, Thomas O’Meara, became the first postmaster. The store did a large and paying business, and P.J.’s popularity was shown by the people of Effingham in electing him their first mayor. 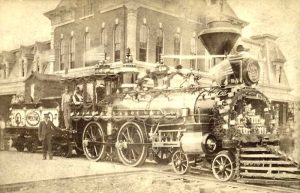 Thomas F. Cook was another early resident of the town who operated the Central Hotel, Milton R. Benton, who was involved in real estate and farming, A. F. Achenbach show was one of the early liverymen, George P. Allen who was a dealer in hardware and grain; Ball & Herron, dealers in harness; Joel M. Ketch, hardware merchant; J. E. McCormick. butcher; Alonzo Spencer, grocer; James Nesbitt, lumber dealer; and Simeon Walters, contractor and carpenter.

In February 1871, Major W. F. Downs, the land commissioner of the Central Branch Railroad, filed another plat in which one block was dedicated as a public park and the streets numbered from one to ten, with six cross streets.

Several churches were established early on. The first to be built was the Catholic Church in 1872 that was then attended by the Benedictine Fathers of Atchison who came by horseback to celebrate Mass for the early community. Four years later, a resident priest was appointed. Several other churches following, including the Methodist Episcopal Church, organized in June 1878, the First Baptist Church was organized in October 1881, and the Methodist Episcopal Church was organized in March 1882. Though organized in November 1872, the Presbyterian Church did not erect a building until 1877, when services began to be held in a frame structure. However, the congregation quickly outgrew the building, and another was completed in 1881. 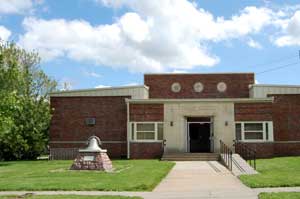 By the early 1880s, Effingham was a thriving community and the supply and shipping center for a large and rich agricultural district. At that time, the town boasted several general stores, a blacksmith, a wagon shop, bakery, shoe shop, furniture store, three doctors, a grade school, and about 400 people.

By 1897, the congregation of the St. Ann’s Catholic Church had outgrown its church building, and a new one began to be built. This historic church continued to stand for more than a century before a fire destroyed it in April 2008. However, a new church was built and continues to serve parishioners today.

In 1907, a school was started in a two-room building just west of the church. Classes were taught by the Benedictine Sisters, who continued their task until 1968, when the school was closed.

The town continued to grow, and in 1910, it had a population of 674, as well as a lumber yard, general stores, two hardware stores, several restaurants, a hotel, implement houses, two banks, a money order post office, telegraph and express facilities, and a weekly newspaper called the New Leaf, which is still published today.

In 1914 the city council secured a 24-hour electric light service over a high tension line from Atchison. At that time, two grain elevators were owned by the Farmers’ Mercantile Association and Snyder, Smith & Company. Tom Tucker and Beckman & Thomas were big livestock shippers, sending from 95-100 cars of livestock out of Effingham every year, while the elevators shipped over 100 cars of grain every year.

Effingham’s population peaked at 676 in 1940 and gradually declined in the following decades. Today, it is called home to about 520 people. The rural community continues to support a post office, several businesses, and a couple of churches. It is located on U.S. Highway 159, about 17 miles southwest of Atchison. 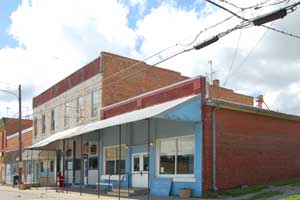