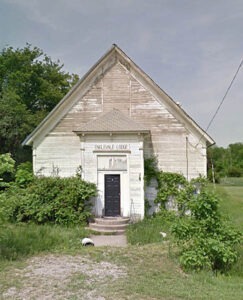 The Englevale Lodge looks like it may have been a school at one time, courtesy of Google Maps.

Englevale, Kansas, situated near the west line of Lincoln Township, in Crawford County is a ghost town today.

This place got its start in the early 1880s, at which time it was called Calvin. A post office was established on March 19, 1884.

However, the town was re-founded in 1890 by Jerry Engle, who laid out the town and named it Englevale for himself.

That year, the Fort Scott and Southern Railroad came through on land owned by David Dick and Jerry Ingals. Frazier & Baysinger built the first store building and put in a stock of general merchandise. The post office name officially changed from Calvin to Englevale on January 14, 1891, with W. L. Baysinger serving as postmaster.

The first school was taught by Charles Finley. Two neat churches, the Methodist Episcopal and Church of God, were established. Soon, there were three other general stores, a drug store, a grain house, and a lumber yard. A coal shaft, employing about 100 men, was in constant operation and produced the very best quality of bituminous coal. The farming lands surrounding Englevale were also very productive.

By 1910, the community was a station on the Missouri Pacific Railroad, which had taken over the earlier tracks. At that time, the town had a money order post office, express and telegraph services, telephone connections, a hotel, a feed mill, some good general stores, and a population of 140.

By about 1920, most coal mining in Crawford County had ceased. In the next decades, the population of Englevale fell and the post office closed on June 30, 1954. 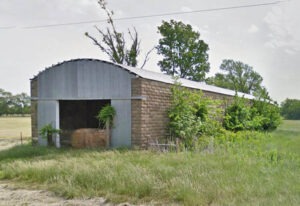 Today, Englevale is officially an extinct town. However, it still has named roads and several homes. There are no open businesses.