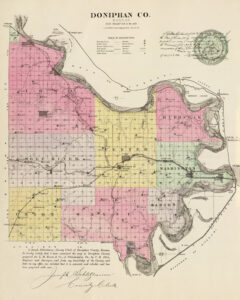 Fanning, Kansas, was a small town in Iowa Township in Doniphan County. It is extinct today.

The community was started by Jesse Reed and James Bradley in 1870. That year, the Atchison & Nebraska Railway came through and built a station and the first blacksmith shop was put in operation. A post office was established on December 14, with James Bradley serving as postmaster.

In 1910, the community was situated on the Burlington & Missouri River Railroad. At that time it had a money order post office and a population of 54.

It was located about seven miles northwest of Troy.