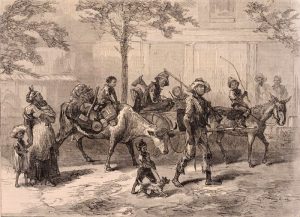 Kansas Governor and Quaker John P. St John established the Freedmen’s Relief Association of Kansas due to the large African-American immigration to Kansas in 1879. The association was incorporated in May 1879. The following month, the group issued an appeal “to friends of the colored people” to “aid destitute freedmen, refugees, and immigrants” migrating to Kansas. The appeal also announced that efforts were being made to establish a colony in Wabaunsee County, about 50 miles west of Topeka, where a tract of land belonging to the state university could be bought for $2.65 an acre.

The organization was controlled by two motives, the first of which was humanity, and the second was “to maintain the honored traditions of our state, which had its conception and birth in a struggle for freedom and equal rights for the colored man.” 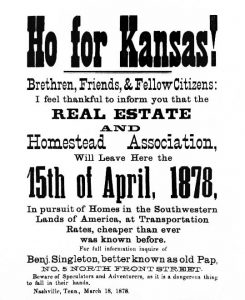 Though the Kansas Constitution allowed all settlers regardless of their ethnic or racial background, anti-black sentiments began to rise as hundreds of these black migrants, called Exodusters, arrived in the Sunflower State. These sentiments caused Federal, state, and municipal aid to the association to diminish, and the organization turned to private donations. The Freedmen’s group also hired John M. Brown, an African American school teacher from Mississippi, and two white Quakers, Laura Haviland, a philanthropist from Michigan, and Elizabeth L. Comstock of Kansas to raise money and direct relief efforts.

The organization then relied almost exclusively on the aid of private philanthropists, religious organizations, and prominent members such as the former abolitionist William Lloyd Garrison and Phillip Armour, a prominent meat packer from Chicago, Illinois. The organization also solicited donations abroad, and English citizens alone donated $13,000.

The association provided temporary shelter, employment, monetary aid, and resettling in various Kansas counties. To help house the influx of African migrants, they built and maintained a temporary shelter called the Barracks in Topeka. This temporary facility housed over 400 men, women, and children as they transitioned to their life in Kansas. The association also helped establish a common school in Dunlap, Kansas, one of the African American communities that welcomed the Exodusters. 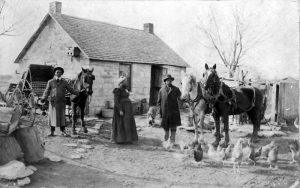 John Summer and his family standing in front of their home located two miles northeast of Dunlap, Kansas.

At the beginning of 1880, the Relief Association had secured jobs for 10,000 workers in Kansas, Nebraska, Iowa, and Illinois. By the end of the Exodus migration in 1881, nearly 3,000 African-Americans had relocated to Topeka.

African-Americans History in the United States