Garfield, Kansas, in Pawnee County,  was first called Camp Criley when it was founded in 1872. A supply station for workmen building the Atchison, Topeka & Santa Fe Railroad, it was named for Captain J.D. Criley, the construction superintendent. 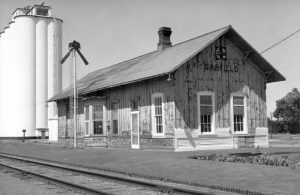 Soon, numerous Ohio emigrants came to the area, taking up some 30 residences. When the town gained a post office on May 28, 1873, it was changed to Garfield, after then-congressman from their old district in Ohio, and later President of the United States. After taking his name, James Garfield promised to give a bell to the first church built in the community.

The Garfield Town Company officially platted the town in December 1873, and the Atchison, Topeka & Santa Fe Railroad Company located an experimental garden of forestry here. It extended across Big Coon Creek and included trees of many varieties.

When the Congregational Church was built in 1875, it received the bell which is now housed at the Garfield Memorial Wayside Chapel, which is a replica of the original church. The roadside chapel is located in Downey Park in Garfield on Highway 56.

On July 25, 1874, Garfield was plagued by grasshoppers, which totally destroyed the area’s crops. By the turn of the century, Garfield had become a primary shipping point and sported a bank, a money order post office, telegraph, express and telephone accommodations, a flour mill, four grain elevators, a hotel, a public library, schools, several churches and a number of retail stores. 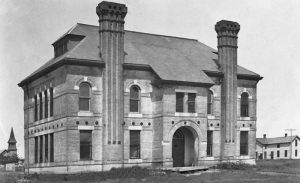 The town was officially incorporated in 1910 at which time it was called home to some 333 people.

Today, Garfield’s population has dropped to around 170. It is located on Highway 56 about 11 miles southwest of Larned.