Garland, Kansas, in southeast Bourbon County, started in the fall of 1874 as a town called Memphis. It is an extinct town today.

The first building was a storehouse which was moved to the site by the firm of Sweeny & Benson to be used as a general merchandise store. About the same time, Keith & Henry moved a store room to the site, where they put in a stock of general goods. During the winter, they were joined by J. M. Terry with another general store, B. Daily with a boarding house and restaurant, and the firm of McLean & Linn also began dealing in miscellaneous merchandise. At this time, Memphis was the terminus of the railroad, which was projected to run from Kansas City to Memphis, Tennessee.

The post office was moved from nearby Appleton on February 1, 1875, with W. R. Clybourn commissioned as postmaster. Appleton, established in 1866, was just near the state line between Kansas and Missouri. After Memphis was established, it absorbed Appleton.

The first religious services were held in the depot in the summer of 1875 by the Baptists. During that summer, a Sunday school was organized. 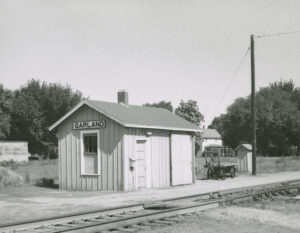 For some time, the people had little hope of the road ever being completed to its projected destination since it remained completed only to Memphis, Kansas, for several months. During this time, the immense coal fields in the vicinity were developed, and the town became important as a coal shipping point. However, the road building was again taken up and was fast approaching the projected point, which would demand a change of the name of this station.

The first school was taught by Miss Adelia Moore in 1878 and was kept in a private residence. In the early part of 1879, a school building was erected, and Mrs. James was the teacher.

The town, being the terminus of the road for so long, and the development of the coal interests, caused it to spring up rapidly, and at one point, it had a population of about 350.

After the road extension began, the town began to decline, and by the early 1880s, its population had dropped to about 100. However, it still had six general stores, two drug stores, two blacksmith shops, a corn mill, a school house, a post office, two churches, and several homes.

In 1881, a Baptist church building was erected, followed by the Methodists in 1882, both being small frame structures. 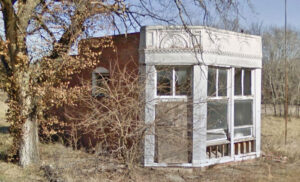 In 1910, Garland was located on the St. Louis and San Francisco Railroad and was a shipping point for a rich agricultural district. At that time, it had a money order post office, telegraph and express facilities, and a population of 276.

In the next decades, Garland did not grow, and its post office closed on November 1, 1997.

Today, Garland is a ghost town. It still has named streets and a scattering of homes — some still lived in and others in ruins. Along its old Main Street can be seen a few old business buildings, a volunteer fire department, and a community center amongst its broken sidewalks. The Mt Zion Missionary Baptist Church is still active.

It is located along the Missouri state line 8.5 miles southeast of Fort Scott. 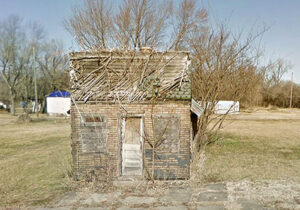