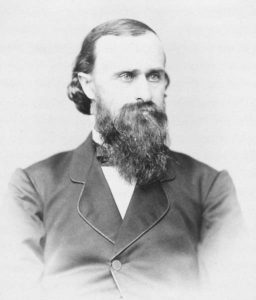 George A. Crawford was a Free-State lawyer and journalist in Kansas.

Crawford was born in Clinton County, Pennsylvania, on July 27, 1827. He was educated at Clinton Academy, of which his father was president, the Lock Haven Academy, and at Jefferson College, where he graduated in 1847. Afterward, he taught school in Kentucky and, in 1847, was a partner in a private school at Clinton, Mississippi. In 1848 he returned to Pennsylvania, where he studied law and, in 1850, while still reading for the bar, became editor and proprietor of the Clinton Democrat. During the early 1850s, he took an active part in politics against the Know-Nothings and, in 1855, was a delegate to the Pennsylvania Democratic State Convention. In the spring of 1857, he came to Kansas, landed at Leavenworth, and accompanied Dr. Norman Eddy, United States Commissioner for the Sale of Indian Lands, to Lawrence.

Later, Crawford, Eddy, and other associates purchased 520 acres of land and organized the Fort Scott Town Company, of which Crawford was made president, a position he held for 20 years. A town was laid out, and the streets were named after Crawford’s friends.

He was opposed to the agitation kept up by the border factions but did not change his Free-State views, and several attempts were made to assassinate him. At the outbreak of the Civil War, he assisted in the Second Kansas Regiment organization and equipped many of its members. When the border was threatened, he organized a committee of safety and was placed at its head. He was active in recruiting several militia companies.

In 1861 he was elected Governor of Kansas on the Democratic ticket, but the election was declared illegal. In 1864 he was again nominated by the Democratic party for governor, but Samuel J. Crawford, the Republican candidate, was elected. Under Governor Crawford, he served two years as Commissioner of Immigration, which was regarded as his greatest work. He inaugurated the system of exhibiting Kansas products in other states and was one of the organizers of the Kansas Historical Society and its secretary for two years.

In 1868 he was again a candidate for governor but was defeated. In 1869 he established the Daily Monitor and a free reading room and museum at Fort Scott. Crawford was appointed a regent of the State University in 1871 and elected to one of the State Agricultural Society’s executive committees. The same year, he was appointed United States Commissioner by President Ulysses S.Grant, to the Centennial Exposition at Philadelphia. When the Ute Reservation was thrown open to settlement, he purchased the site of the town of Grand Junction, Colorado, and was instrumental in building it up. He died there on January 26, 1891.