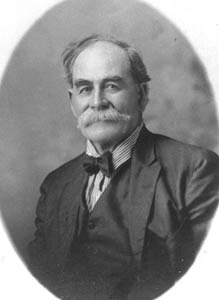 George Washington Clarke was a pro-slavery border ruffian who was involved in a number of Bleeding Kansas skirmishes before he was finally driven from the state permanently in 1858.

Clarke is born on April 13, 1841, near Roscoe, Ohio to Moses Clark and Susan Louisa Coffman. His father died when he was eight years old and by 1850 he is living with his aunt. When he was 12, he moved to Illinois.

He then made his way to Kansas as a Potawatomie Indian agent. A slaveholder, he was suspected of killing a Free-State man, Thomas W. Barber of Lawrence during the Wakarusa War of 1855. The next year, while sitting at this desk in his Lecompton home, a shot was fired at him but it missed. That same year, Clarke led a party of 400 Missourians into Linn County, where they plundered, robbed, and burned the homes of nearly every Free-State family. In 1857, he began to work in the U. S. Land office in Fort Scott, where he continued his pro-slavery activities.

He was finally driven out of the state and into southwestern Missouri in August 1858. In 1861, he joined the Army during the Civil War. On Feb 15, 1863, he becomes a prisoner of war at the Libby Prison, where he spent months malnourished and suffering from scurvy. He was given honorable discharge in 1865 in Nashville, Tennessee.

After the war, he married Nancy Lucinda Wood in Canton, Missouri and the couple would eventually have nine children. He spent most of his life as a farmer, first in Adams County, Illinois and then in 1906 he moved with his family to Shelby, Missouri where he spent the remainder of his years.

He died on May 28, 1924, of pneumonia in Taylor, Missouri, United States. He is buried in an unmarked grave at Cherry Box Cemetery in Shelby County, Missouri.