Girard, Kansas, is the county seat of Crawford County. It is located in the central portion of the county,

Girard was founded in the spring of 1868 to oppose Crawfordsville as the county seat. The location was based around the surveyed line of the Kansas City, Fort Scott, and Gulf Railroad. The town was laid out with a public square the same year by the Girard Town Company, of which A. Dauford was president and Dr. Charles H. Strong was secretary. It was named Girard by Mr. Strong, after his hometown in Pennsylvania. 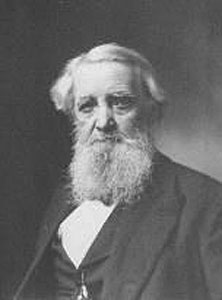 The first dwelling was erected by Charles Strong, who was appointed the first postmaster when the post office was established on September 30, 1868. Colonel J. Alexander opened the first store. A second store was soon afterward opened by N. Sinnet, and Chauncey Doyle opened a saloon. A blacksmith shop and a hotel were also established. In December 1868, James Hull erected a frame building on the north side of the square used as the first courthouse. The first story was divided into four rooms for various county officials, and the second story was reserved for the District Court.

The first schoolhouse was built in 1869 with Maggie T. Hill as the first teacher.

The Girard Press was moved by Warner & Wasser from Fort Scott to Girard in November 1869, the first issue appearing on November 11.

Owing to the troubles over the building of the railroad, the growth of Girard was slow for a time. However, in February 1870, Girard had five hotels, eight saloons, six grocery stores, five dry goods stores, two hardware stores, two furniture stores, a drug store, a newspaper, a printing office, and numerous dwellings, totaling 140 buildings.

Soon the Kansas City, Fort Scott, and Gulf Railroad depot was established in the north part of the town, and the first passenger train reached Girard on March 3 to much celebration. Telegraph wires were established the same month. 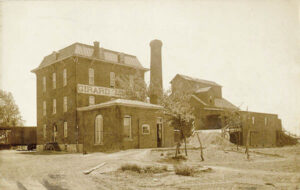 In the spring, a new schoolhouse was built by Frank Playter.

The Crawford County Mills were built in 1870. Standing two and a half stories high, the mills contained three run of buhrs and one set of rollers, propelled by a 25 horse-power engine. The Girard Mills were built the same year and began operations in the spring of 1871. The first structure was a two-and-a-half-story frame building, costing, with the machinery and power, $10,000. The property was owned by Tontz & Hitz.

By this time, several churches had been organized.

In March 1871, Girard was incorporated as a city of the third class, and at the election in April, George Ryan was chosen as mayor. 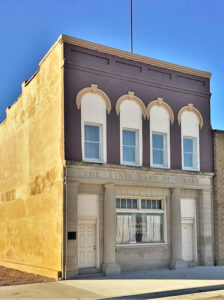 Franklin Playter started the first bank in Girard in June 1871, and the following year, he erected a two-story brick building to house the bank. In the following decades, the bank would change hands several times. Between 1905 and 1915, it was owned by Sarah A. Haldeman, the state’s first woman banker. The building still stands today at 105 E. Prairie. It is listed on the National Register of Historic Places.

The Girard Press had strong opinions about the title to the Neutral Lands, and its office and equipment were burned down on July 14, 1871, and destroyed. The loss was $4,000. However, new equipment was obtained, and the newspaper, enlarged and improved, reappeared on August 13 and began regular weekly publication. The newspaper continued to be published for 140 years before being discontinued in 2009.

In 1879, Tontz retired from active participation in the management of Girard Mills and, in 1882, sold his interest to Hitz, who erected a three and a half story brick mill, put in five-run of buhrs, and two sets of Gray’s patent rollers.

A high school was established in 1882. 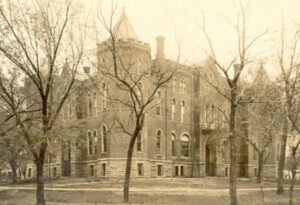 In 1889, construction began on a new brick courthouse. In August 1889, 37 men were working on the building with 18 quarrymen and four teams of horses at a quarry near Farlington. Eleven more men worked at Colonel Daniel’s quarry in Crawford Township to support the project. Designed in the popular Victorian Gothic style, the new building measured 90 feet by 120 feet and was four stories high from the basement to the skylight. The arched doors and windows were framed with elegant cut stone trim, and the roof was made of slate. The “tower” rooms located at all four corners were a defining feature of the Victorian Gothic style. Each one was 23 feet in diameter.

By 1910, Girard had upgraded to a city of the second class and was equipped with waterworks, electric lights, fire and police departments, and a sewer system. It also had good public schools and several churches. Businesses represented were three banks, three weekly newspapers — the Girard Press, the Independent News, and the Appeal to Reason, an international money order postoffice with seven rural routes, a telephone exchange, an opera house, telegraph and express offices, good hotels, and several fine stores and residences. Among the industries were flour mills, an oil refinery, a creamery, cereal coffee, condensed milk, vinegar and fence factories, a stove works, and an ice and a cold storage plant. Many residents were employed in mining operations in the coalfields, and large quantities of coal were shipped from Girard every year. At that time, the city was on the lines of the Atchison, Topeka & Santa Fe Railroad, and the St. Louis and San Francisco Railroad. Electric lines also connect it with Franklin and Dunkirk. The population in 1910 was 2,446. 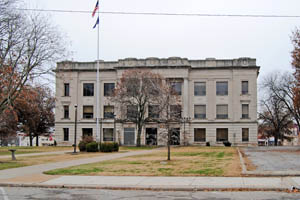 By 1911, the elegant courthouse built in 1889 was badly cracked, and the plaster had to be removed and redone. It continued to crack, buckle, and twist in the following years. By 1918, the southwest tower was leaning eight inches out of alignment. In 1920, the offices were moved to various buildings around the square, and the courthouse was razed.

The current Crawford County Courthouse was formally dedicated in June 1922. Built on the site of the previous courthouse, it is a three-story structure with a basement measuring 123 feet by 97 feet. Made of Carthage stone, it features marble throughout the interior and over 90 windows. 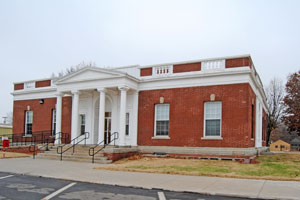