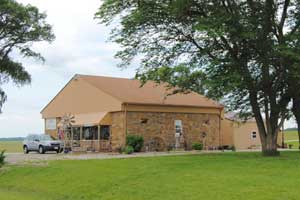 Globe, Kansas got its start in 1857 when the Marion Town Company laid off a townsite of 320 acres. It was first named “Marion,” in honor of General Francis Marion, of Revolutionary War fame.

A post office was established on November 16, 1858, and the Town Company dug a well and built a blacksmith shop. That year, a store was opened by David Hubbard, and a few houses were built. Two years later, Hubbard expanded, and his facilities became known as Hubbard’s Stage Stand, which included the small store, the post office, and stagecoach service.

Hubbard operated the stand from 1861 through 1863, when his business suffered the consequence of guerrilla warfare during the Civil War. Following the Diamond Spring Station raid in May 1863, Dick Yeager and his fellow brigands rode eastward on the Santa Fe Trail. They stopped at Hubbard’s place, shot the proprietor, stole a horse, and continued eastward. At Black Jack, they intercepted a stagecoach.

Robbing the passengers of their valuables, they pressed on to Gardner, where they robbed the express office, stole clothing from some hotel guests, and took horses belonging to the hotel’s proprietor. Fleeing Gardner, they soon crossed the Missouri line. David Hubbard survived the shooting but soon abandoned his business and accepted a position in the commissary department of the Thirteen Corps, United States Army, in September 1863.

Today, the town no longer exists. It was located in the extreme southwestern portion of the valley of Eight Mile Creek, about 12 miles west of Baldwin City.

Globe and Hubbard’s Stage Stand, the first of the trading establishments in Kansas, was located seven miles east of the Osage-Douglas county line along present-day Highway 56 at North 500 Road. A historic marker labeled Globe is located about two miles north of U.S. Highway 56, but it is somewhat misleading. The actual site was located one mile north of the current Globe Store on U.S. Highway 56.