Black Jack, Kansas, located in Douglas County, was established in 1855 as a supply point for traders and pioneers along the Santa Fe Trail.

The town had barely been settled before it found itself in the midst of the Kansas-Missouri Border War. After abolitionist John Brown’s two sons were captured and held prisoner by Henry Pate, Brown, along with 29 men, fought the Battle of Black Jack on June 2, 1856, against Pate and his men. John Brown and his men won the battle, capturing 22 of their opponents, which Brown agreed to release when his sons were released. Some historians consider the Battle of Balck Jack to be the first actual battle of the Civil War.

Also killed in June of that year was one of the first setters — David Fearer, who was a Corporal in Company D of the 2nd Missouri Militia. He was shot down in an ambush by William Quantrill’s guerillas between Independence and Pleasant Hill, Missouri, while on patrol guarding a mail coach. They also broke into and robbed Brockway & Stonebraker’s store, carrying away about $1,800 worth of goods and setting fire to the building. The fire was extinguished by a determined lady named Mrs. John M. Hays. 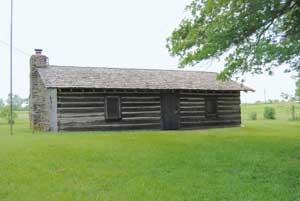 An old cabin is preserved at Black Jack, Kansas, by Kathy Alexander.

The town was incorporated in 1857, and the first school was held in a log house, taught by Mrs. Elizabeth Craig, in 1858. The first sermon was also preached in a cabin by Reverend Samuel Kretsinger the same year. The post office was established on March 15, 1858, with S.A. Stonebraker appointed the first postmaster who had started the first store in January. A schoolhouse and the Presbyterian Church were both built in 1859. It boasted a tavern, post office, blacksmiths, a hotel, general store, doctor’s office, schools, and two churches at its peak.

During the Civil War, a fort was erected here for the protection of the town. On May 8, 1863, Dick Yeager made a raid upon the village, robbed Brockway & Stonebraker’s store, and stole the horses belonging to the overland stage route. On August 15 of the same year, “Bloody Bill” Anderson made a raid into Kansas, and on his return from Morris County, where he had killed Captain Baker, thrown his body into the cellar and burned his house down over him, made a call on Black Jack. He intercepted the overland mail, stole 14 horses, eight of them belonging to the mail, and took some $2,000 from the passengers. 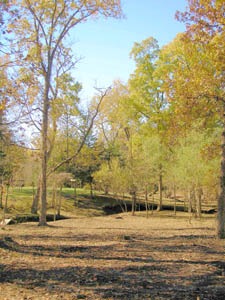 After the Civil War, traffic along the Santa Fe Trail began to dwindle, especially upon the completion of the Kansas Pacific Railroad to Ellsworth. On October 20, 1894, the post office was closed, and the town was soon abandoned.

The site is located near U.S. Highway 56, about three miles east of Baldwin City, with interpretive signs pointing out where the battle started and ended. The old townsite is partially within Robert Hall Pearson Memorial Park. Located adjacent to and immediately south of the Black Jack Highway Park, the Ivan Boyd Prairie Preserve contains some of the best-preserved and managed native prairie in Douglas County, Kansas. The site is well known for containing evidence of the wagon ruts caused by travel along the Santa Fe Trail.