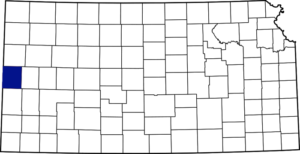 Greeley County, Kansas, on the western tier, is located midway between Oklahoma and Nebraska. Its county seat and largest city is Tribune. As of the 2020 census, the population was 1,284, making it the least populous county in Kansas. The county is named after Horace Greeley, editor of the New York Tribune, who encouraged western settlement with the motto “Go West, young man.”

In 1873, Greeley was the last county in the state to be created. It is bounded on the north by Wallace County, east by Wichita, south by Hamilton, and west by the State of Colorado. The surface is prairie, and the elevation is from 3,000 to 4,000 feet. The principal stream is White Woman Creek. The streams have no water in them for the greater part of the year, but there are undercurrents evidenced by the fact that water is found at the depth of a few feet.

In the fall of 1885, more people began to settle in the county, and the first community created was Hector. In the next two years, many more people moved to the area, and several towns were established. In fact, so many towns were created that many people alleged there were more towns than there were claim houses. Horace was established in June 1886, and at the time of the county seat fight, it had 300 inhabitants, a bank, and a newspaper. Tribune had 200 inhabitants and a newspaper. Colokan was a little town large enough to have a newspaper. Reid was established in September 1887 and, within three months, had two stores, a hotel, two restaurants, and a newspaper. The Missouri Pacific Railroad was built in the early days of the settlement of the county, and a depot was erected at Tribune in 1887. It crossed almost directly east and west through the center.

An injunction suit was filed to prevent the organization of the county on charges of bribery and fraud in the census. However, the injunction was not granted, and the proclamation of organization was made by Governor John Martin in July 1888. Tribune was named as the temporary county seat. The following officers were appointed: County clerk, James W. Brown; sheriff, Allen E. Webb; commissioners, A. J. Rymph, A. K. Webb, and R. Q. Thompson. Three townships were created, including Colony, Harrison, and Tribune.

The election to decide the permanent location of the county seat was held in November 1888 and resulted in favor of Tribune.

In the late 1890s, people began to brand their cattle, with Robert Eadie being the first to register his brand in Greeley County.

From 1895 to 1920, Greeley County suffered tough economic and environmental problems, and the population decreased. Simon Fishman helped save Greeley County in 1920 when he put his money into developing the Pacific House in Horace and using modern tractors and machinery within the county. From 1920 to 1923, Greeley County started to grow once again.

The Great Depression hindered Greeley County, as it did all over the country.

By 1910, farm products were valued at $137,346, with sorghum, which is raised for forage and grain, being the most valuable. Other crops included barley and corn, and raising livestock was profitable. The population at that time was 1,335. There were 13 organized school districts with 232 students. The value of the taxable property was $3,531,197, making the average wealth per capita $2,720, which was several hundred dollars over the average for the state. 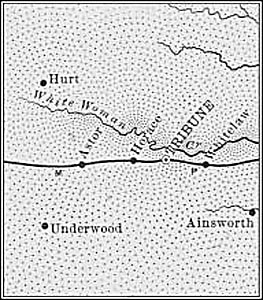