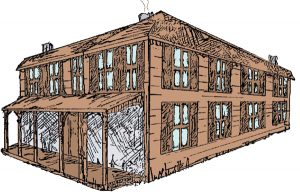 Guittard Station in Marshall County, Kansas, was a travelers’ rest, an Overland stage stop, and a Pony Express Station in 1860.

George Guittard, a French immigrant, came to America in 1833. He journeyed west in 1857 with his family of five, traveling by rail to St. Louis, Missouri, then by river steamer to St. Joseph, and by ox team to Kansas. Their ranch on Vermillion Creek became the first permanent settlement in northeast Marshall County.

In 1859 George Guittard built a 12-room, two-story lodge to accommodate the needs of more people passing by wagon, coach, and horseback. Guittard Station became a thoroughfare for Russell, Majors, and Waddell’s Overland stage line and the Fort Leavenworth to Fort Kearny Military Road. The station served as an inn to refresh travelers, sell supplies and water, graze and shelter animals, and aid in repairing wagons and coaches. 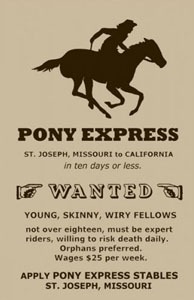 As part of its mail dispatch between Missouri and California, this location became a relay station for the famous Pony Express in 1860. The station had two stables with over 20 horses. Mounts were prepared for riders, saddled and ready. A fresh horse, water, and food made Guittard Station a welcome stop after a fast ride across the rolling green prairie. In late 1860, the noted English traveler Richard F. Burton saw the Pony Express rider arrive at Guittard’s Station. Burton described the station as a “clump of board houses on the far side of a shady, well-wooded creek—the Vermillion, a tributary of the Big Blue River…”

George’s son, Xavier Guittard, managed the station and became the first postmaster in 1861. He would serve as such for 42 years, distributing mail through pigeon holes inside the west entrance of Guittard Station. A large, two-story house provided living quarters and a waiting room for stage passengers, and the roomy barn accommodated a blacksmith shop and stalls for some 24 horses. This was the most noted stage station on the Ben Holladay Overland stage line between the Missouri River and Denver, Colorado.

In 1910 the post office was discontinued, the house was dismantled, and the lumber went into building a new dwelling on the same site. That same year, the settlement had a population of 28 people and received its mail from Beattie.

The site is located about eight miles northeast of Marysville on private property. A marker sits a short distance west of the site. Though no remnants of the station exist, part of the original boards from the station were used in a barn that still stands. The Pony Express Re-ride takes place along this route each year. The marker is on the east side of 21st Road between Frontier and Granite Roads, three miles north of Beattie.

“We spanned the prairie to Guittard’s Station, on the far Saddle Up side of a shady, well-wooded creek, the Vermillion… at Guittard. For dinner… the ham and eggs, and hot rolls and coffee were fresh and good, and although drought had killed the salad, we had an abundance of peaches and cream, an offering of French to American taste.”