Hammond, Kansas, an extinct town in Osage Township of Bourbon County, was named for a pioneer family.

One of the first settlers was Captain M. Howard, who owned and operated the Sleepy Holly Farm and bred thoroughbred cattle. A post office was established on April 18, 1877, with F. M. Allen as the postmaster.

At one time, the population reached 100 with several thriving businesses, including two mercantile stores and a cheese factory. A blacksmith shop was an early-day necessity, and the first one in Hammond was the Jerry Baker Shop, later run by J.W. Johnson. Mrs. Johnson had the switchboard for all surrounding rural telephones in her home.

In the 1880s, the Missouri River, Fort Scott & Gulf Railroad came through. It was later known as the St. Louis and San Francisco Railroad. J.H. Miller operated a general merchandise store in the 1880s. A larger general mercantile store was owned and operated by George Currier and had an attached ice house. A short time later, a smaller store was built and was known as the Smith Store. After a fire destroyed the Currier Grocery, Gilbert Moore built a replacement one block south on the main east-west road. This was later operated by B.W. Orr and Wallace Malone. 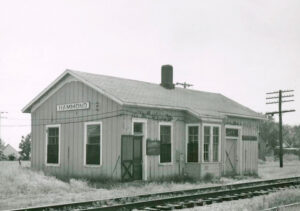 The Methodist Church was built on land donated by William McIntosh and was dedicated in 1884. The local school was built about the same time.