The first settlement made in the vicinity of what is now known as Herkimer, Kansas was by the Fredericks Brothers and H. Lenker, who settled on Horseshoe Creek in 1858. They were followed in 1859 and 1860 by H. Hibermann, the three Reamer brothers, I. and N. Holloway, James Bartlou, T. Koeneke, and others. 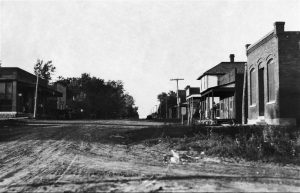 School district No. 63 was organized in 1870, and a stone schoolhouse was built. In 1874, through the efforts of O. Keller, a post office was established under the name Reamer Creek, with F. Reamer acting as postmaster. A few weeks later the office was discontinued.

In 1878, a townsite was laid off on a tract of land owned by O. Keller, who was its founder. The first residence was built on the townsite by Adanf Keller.

The first business house built in the place was erected by Wesley Ulch in 1880. He remained about two years. A post office was established on July 18, 1878, and named for a town by the same name in New York. In 1879 the neighboring farmers contributed a lot of work for a sidetrack, doing the scraping and leveling, and in 1880 a depot was built for the St. Joseph and Western Railroad with Charley Tobias as agent.

Soon H. Ainelunxen built a one-story frame store on the east side, John Huber built a hardware store and tin shop, and August Fisher, a blacksmith shop on the west side. In 1881 V. W. Emmert started a lumber yard and erected a warehouse for handling grain. In 1881 the school was destroyed by a severe storm but was rebuilt in the summer of 1882.

Dr. R. L. Tayes built a drug store and office in 1883; Herman Engel was the first harness maker in town, he came in 1884. About that time Charles and Anton Huber erected a two-story double frame store, with the second story being used for theatre and public gatherings. A steam-grain elevator was moved from Hanover to Herkimer in 1889 by W. H. Koeneke. 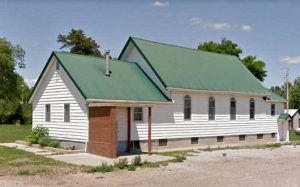 The Zion Lutheran Church was established in Herkimer in 1892 as an offshoot of the Immanuel Lutheran Church near Bremen. A parsonage and schoolhouse were also built. The church continues to serve a congregation today.

On April 26, 1902, a fire destroyed every business building in town except the elevator and Doctor Tayes’ drug store, causing a loss exceeding $40,000. Unfortunately, the town never fully recovered.

Situated in the midst of a rich agricultural community Herkimer was the business center for Logan Township in 1910. At that time, it had a telegraph, express and post office, and the population was 225.

Though the town’s population continued to fall, it still boasted a number of businesses in 1917 including the Herkimer State Bank, a general merchandise store, a hardware store, garage and automobile dealership, a barbershop, shoe shop, meat market, blacksmith, implement dealer, restaurant, a pool hall, and the grain elevator. At that time, the town was called home to about 130 people.

The Herkimer School continued to teach students until 1966. The building still stands today.

The post office closed its doors in May 1974. Though the population of the town is unknown today, Herkimer Township is called home to about 230 people. Herkimer is located on a bend of Reamer Creek, five miles northwest of Marysville. 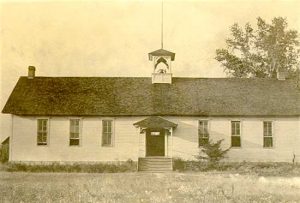 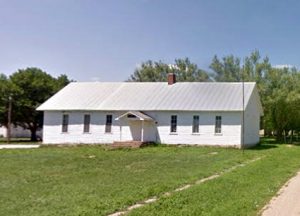