Hiattville, Kansas, in Pawnee Township of Bourbon County, was first called Pawnee. It is an extinct town today.

Edwin B. Rall was the first settler here in May 1870. Soon several others, including Thomas Hartwell, D. R. Anderson, Jacob Dockter, and William Daly followed.

Edwin Rall kept the first store which opened on May 1, 1870, and D. R. Anderson was the second storekeeper. Shortly afterward, Jacob Dockter opened a blacksmith shop. 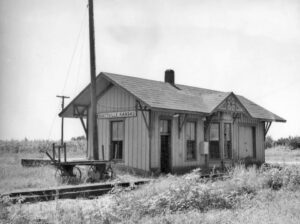 After the Missouri, Kansas & Texas Railway came through the area and built a depot, the town’s name was changed to Hiattville on April 2, 1872. It was named for James M. Hiatt, who owned the land upon which the town was located.

By the early 1880s, Hiattville had two general stores, the proprietors of which bought grain and all kinds of produce; one blacksmith and wagon maker; a dealer in lumber and agricultural implements; and a population of 75. In the following years, it expanded, and by 1891, there were 500 inhabitants. At its peak, Hiattville boasted two blacksmith shops, a livery stable, a barber shop, a drug store with a soda fountain, a bank, three general stores, a harness maker shop, shoemaker, cheese factory, hotel, meat market, grain elevator, feed mill, hardware store, three doctors, a restaurant, furniture store, an insurance agent, and a railroad depot with a telegraph service.

‘Hiattville is really booming. A large school building has been put up, and religious services are held there. The Catholics of the place have purchased lots and will at once commence construction of a new church. And the Methodist and Christian denominations will do the same.'” — The Fort Scott Tribune, October 23, 1884 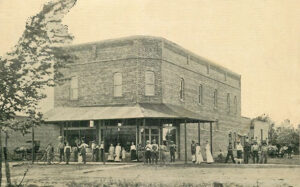 The Hiattville Weekly Optic newspaper began publication in June 1892 but only lasted until May 1893.

Unfortunately, the town suffered a tragic fire on May 1, 1905, that destroyed most businesses. However, the townsfolk rallied, and many buildings were rebuilt, including several general stores, a blacksmith shop, a school, several churches, and the post office.

In February 1908, another newspaper called the Hiattville News began publication. It continued for two years until February 1910.

In 1910, the town was located on the Missouri, Kansas & Texas Railway and had several general stores, a blacksmith shop, a school, a church, a money order post office, telegraph and express facilities, and a population of 225.

In the following years, the town got a boost when a group of ranchers established their headquarters in Hiattville. The largest was the O’Bryan Ranch which held auctions to sell their Polled Herefords, and their Hampshire hogs were recognized worldwide. When Joe O’Bryan came to Hiattville, the depot, express office, and telegraph office had been closed. However, he was successful in getting them re-opened and began shipping livestock. He also took over and improved the grain elevator.

The Hiattville School District No. 101 erected a new four-room brick building in 1939 to replace the old wooden one. It was built with help from the Works Progress Administration. 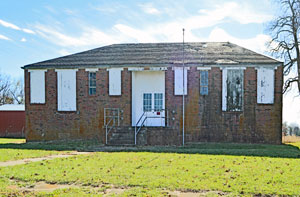 At one point, Hiattville had four churches, including Baptist, Methodist, Catholic, and one other. The Baptist Church in Hiattville burned in the 1930s, and the Catholic Church closed in the 1950s due to low membership. It was later torn down. On August 20, 1955, the Methodist Church was destroyed by fire. Services were then held on the second story of the general store while it was being rebuilt. The new church was re-opened on August 5, 1956. This church remains active today.

In the late 1960s, the Hiattville school consolidated with Uniontown. The building still stands today.

One of the last businesses open in Hiattville was a general store. In the 1970s, it provided hardware, basic groceries, processed meat, Pioneer seed, and DX gasoline.

The Missouri, Kansas & Texas Railway abandoned its line in the area in 1988.

Hiattville is located about 13 miles southwest of Fort Scott, near state highway thirty-nine. 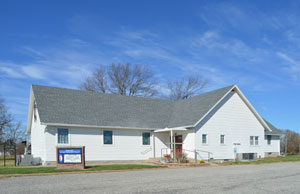 The Methodist Church in Hiattville, Kansas is still active., by Kathy Alexander.