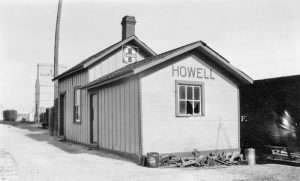 Howell, Kansas is an extinct town in Ford County.

Originally known as Morrison Station, the town was yet another railroad stop. It gained its first post office, simply called Morris, on June 2, 1886. However, it closed just two years later, on October 31, 1888.

The boom years for this town were in the 1880s and early 1890s when the population reached 150 people. A post office called Howell, opened on November 26, 1895, but it too was short-lived and closed on April 30, 1897. However, that year the Atchison, Topeka & Santa Fe Railroad built a depot. The post office was reestablished on August 10, 1909. It closed too on March 6, 1916, when rural mail service began in Ford County.

The village itself has all but disappeared except for the grain elevator and county rural fire station. However, some of the best-preserved Santa Fe Trail ruts can be found across US Highway 50 and west of the elevator. The site also includes interpretive storyboards. The site is located nine miles west of Dodge City on US Highway 50.